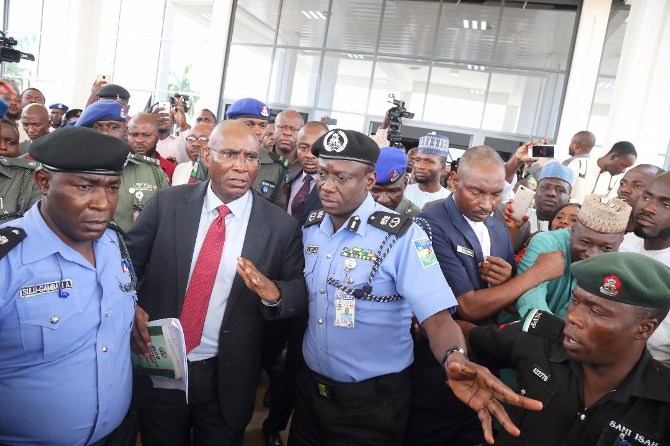 A leading pro-democracy and Non-Governmental Organization a�� HUMAN RIGHTS WRITERS ASSOCIATION OF NIGERIA (HURIWA) has strongly condemned the armed invasion by hoodlums of the senate chambers and the theft of the mace..

Describing the attack as a dangerous precedent and a deadly attack on a key institution of constitutional democracy, the Rights group has accused the executive arm of government that controls the security forces of collusion and conspiracy in the disgraceful episode at the Senate of the Federal Republic of Nigeria.

HURIWA has also called for the immediate convocation of a judicial commission of inquiry to be drawn entirely from the Federal Judicial Service Commission and headed by a serving judge of the Supreme Court to investigate the invasion and make recommendation on how to safeguards the integrity and honour of the nation’s constitutional democracy in the face of the attack on a key component of the Tripod of governmental powers.

Besides, HURIWA through a jointly issued press statement by the National Coordinator Comrade Emmanuel Onwubiko and the National Media Affairs Director Miss Zainab Yusuf has called for the arrest of the sponsors of the invasion and the attackers and their prosecution for treason.

a�?The criminal act of violence and depravity visited on the national assembly by armed goons suspected to have been brought by a suspended senator Omo a�� Agege must not be allowed to go unpunished. The criminal and shameful act is truly an attempt to overthrow the legitimately constituted authority of the legislative arm of government.a�?

a�?There is no doubt that the invasion of the senate by the unruly mob is not just a slap on the integrity of the legislature but has brought global opprobrium on Nigeria coupled with the general state of insecurity and coordinated killings of innocent citizens by armed Fulani herdsmen. We call on President Buhari to take measures to sanction or sack all the heads of the security forces who have shown a high level of professional incompetence because clearly, the state of insecurity has expanded even as the attack on the senate is a further proof that the President may have run out of useful ideas on how to protect lives and property of Nigerians.a�?

Also, HURIWA has asked the President Major General Muhammadu Buhari(rtd) and the President of the Senate Dr. Bukola Saraki who are both outside of the shores of Nigeria at the precarious times of breakdown of law and order to return home immediatelly and fix the broken system.

a�?By section 4 (1) of the Nigerian constitution, the legislature controls the legislative powers of the federation. Any pre-meditated attack on that institution is an attack on democracy. We as citizens of Nigeria must resolutely and collectively speak out and take action to defend the constitutional democracy that we are enjoying. This is because some reactionary forces embeded in the Executive arm of government are carrying out dangerous and unconstitutional activities that may instigate military’s violent overthrow of the government. Nigerians must do everything within our powers to stop these enemies of Nigeria from destroying civil rule”.

9 policemen arrested for extortion in Lagos

10 thoughts on “HURIWA Condemns Invasion of Senate;A� Calls for Prosecution of Perpetrators:”