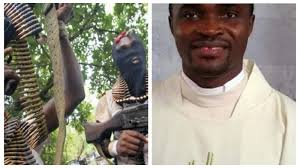 The Prominent Civil Rights Advocacy group- HUMAN RIGHTS WRITERS ASSOCIATION OF NIGERIA (HURIWA) has condenmed the kidnapping of A Roman Catholic Priest Reverend Father Theophilus Ndulue in Enugu State even as HURIWA thinks there are kidnapping cells in Enugu State with specific instructions to target Roman Catholic Priests with a view to instigate bloody Religious upheavals in the South East of Nigeria just as the Rights group has asked the National Assembly and the Houses of Assemblies of the 36 states of the Federation to fashion out effective national legislations to effectively curb the rising cases of armed kidnappings for ransom. HURIWA also wants the National Assembly and civil Rights leaders in Nigeria and all Nigerians to speak out and demand that the Inspector General of Police Mohammed Adamu render daily accounts of the status and the whereabouts of the over 5,000 armed Fulani herdsmen, bandits and kidnappers the Nigerian police force has paraded over the past one year so Nigerians can be told if any of these ‘detained’ kidnappers have faced the full weight of the law in compliance with the dictates of the Constitution of the Federal Republic of Nigeria.

HURIWA in a statement endorsed by the National Coordinator Comrade Emmanuel Onwubiko and the National Media Affairs Director Miss Zainab Yusuf stated that: ” We expect that a state like Enugu state that has continuously witnessed grave breaches of the right to safety of her citizens ought to have embarked on far -reaching measures with a view to stamping out this menace. It would seem that the Enugu State governor Mr. Ifeanyi Ugwuanyi would have to engage the other regional partner governors in the other 5 South East states of Nigeria so the issues of security breaches are given effective regional solution because these violent criminals may be operating from sister States. It is an obligation on the Enugu State governor Mr Ugwuanyi to confront the unprecedented security nightmares facing the good people of Enugu State in line with the provisions of the Nigerian Constitution in Section 14(1) and (2). Specifically, section 14. (1) affirms thus: “The Federal Republic of Nigeria shall be a State based on the principles of democracy and social justice.(2) It is hereby, accordingly, declared that:(a) sovereignty belongs to the people of Nigeria from whom government through this Constitution derives all its powers and authority;

(b) the security and welfare of the people shall be the primary purpose of government: and

(c) the participation by the people in their government shall be ensured in accordance with the provisions of this Constitution.”

“HURIWA believes strongly in the conspiracy theory that given the unprecedented rate of violent attacks by criminals and armed kidnappers including armed Fulani herdsmen, it is clear that Enugu state is under siege of kidnapping and other highly networked and organised criminal gangs which has manifested in the fact that another Catholic priest, Reverend Father Theophilus Ndulue has been abducted by yet to be identified gunmen. As gathered by the media reporters, the abducted young Priest Fr. Ndulue, Parish priest in Ihuonyia, Amansiod in Ndiagu Oghe, Ezeagu Local Government Area of the State was kidnapped on his way home along Amansiodo road on Friday evening even as this specific violent kidnapping incident is coming barely 18 days to the day that the Vice-Rector of Queen of the Apostle Spiritual Year Seminary, Imeize Owa in Ezeagu Local Government Area of the state, Father Arinze Madu was kidnapped at the Seminary gate on October 29. On the last count, this has brought to eight Catholic priests that were kidnapped in less than eight months among them two were killed.

It would be recalled that this latest case of kidnapping has been confirmed by the Enugu Catholic Communication Director, Rev. Fr. Benjamin Achi, even as recently as two months ago, the entire Roman Catholic community in Enugu State poured out on the streets in the hundreds of thousands to protest the incessant and near unending cases of bloody kidnappings of Priests.

“HURIWA is once more appealing to the consciences of politicians in the National Assembly and the Presidency to take steps to concretely reform the ineffective and serially inefficient and incompetent Nigerian police who often are incapable of preventing violent crimes from happening but are good at confirming the occurances of violent criminality just as the Spokesman of the Enugu police command, Ebere Amaraizu who confirmed the abduction on telephone interview told the media that the incident took place along Amansiodo road on Friday night while the priest was driving to his Parish alongside his parishioner known as Stella Nwodo.”

HURIWA has also expressed shock that the Nigerian Police Force has so far paraded thousands of suspected armed Fulani bandits and kidnappers but due to secrecy and lack of accountability, Nigerians are in the dark regarding the stage of prosecution or otherwise of these detained kidnappers just as it is been suspected that these armed kidnappers may have been released by police making them to recommit these heinous crimes.