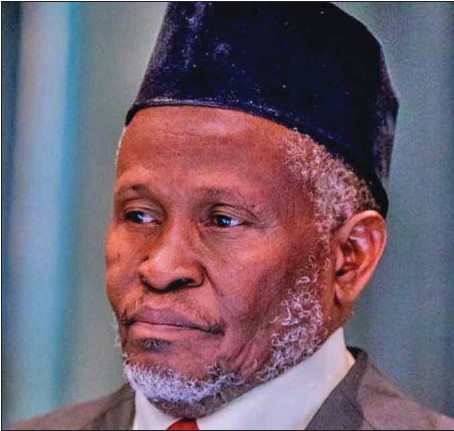 A leading pro-democracy and civil Rights advocacy group – HUMAN RIGHTS WRITERS ASSOCIATION OF NIGERIA (HURIWA) has condemned the chief justice of Nigeria, Tanko Muhammad over his reported threats to deal with the coalition of United Political Parties (CUPP) even as the group warned the apex court’s jurist to stop dancing naked in the political arena.

Besides, the pro-democracy platform faulted the ill-timed decision of the chief justice of Nigeria to embark on sensational media gymnastics when his office took on the opposition politicians only because they made allegations about suspected shady deals with political undertones within the hierarchy of the justice sector aimed at undermining the judicious adjudication of the appeal instituted before the highest nation’s court by the presidential candidate of the opposition People’s Democratic Party (PDP) and former vice president Alhaji Atiku Abubakar who is challenging the decision of the presidential poll’s petition tribunal awarding president Muhammadu Buhari over Atiku in the litigation challenging the 2019 presidential election.

HURIWA said it was shocked that the usually conservative and taciturn supreme court of Nigeria seems to have breached her code of conduct by dabbling into the arena of political and media war with a legitimate group of aggrieved political opposition political parties who under the constitutionally guaranteed freedom of expression had voiced their opinion on suspected foul play in the supreme court of Nigeria.

The Rights group through the national coordinator comrade Emmanuel Onwubiko and the national media affairs director Miss. Zainab Yusuf, said the chief justice of Nigeria cannot intimidate, harass or threaten citizens of Nigeria in a constitutional democracy only for exercising their constitutional rights just as the Rights group said the chief justice of Nigeria could have exercised the highest circumspection by acknowledging that clear conscience fears no accusations rather than to climb the high horses and to blow hot in a seemingly authoritarian mode against a group of Nigerians threatening to prosecute them as if he is allowed by law to be the prosecutor and the judge in his own case.

“The office of the chief justice of Nigeria must steer clear of any media showmanship that could graphically paint the temple of justice of being controlled by persons with certain political affiliations or persons who feel that they are above constructive criticisms which are clearly guaranteed by numerous provisions of the chapter four of the 1999 constitution and primarily by section 39(1) which states that Nigerian citizens are entitled to freedom of expression including freedom to hold opinions and to receive and impart ideas and information without interference.”

“We are in a very critical stage of our political life. The current chief justice of Nigeria should be aware that his emergence as acting chief justice of Nigeria through a disputed ex-parte order issued by a quasi-judicial forum like the code of conduct tribunal presided over by a chairman who was once charged or accused by the Economic And Financial Crimes Commission (EFCC) of alleged #10 million bribery scam, is contentious. This current chief justice of Nigeria must maintain decorum and not be seen or perceived as a judicial official who is not open to constructive political debate. If the allegations made by the Coalition of United Political Party (CUPP) are not accurate, let him provide his own side of the story without issuing unnecessary threats.”

“We in the Human Rights Writers Association of Nigeria (HURIWA) are alarmed by the reported threats to prosecute a set of Nigerians for simply exercising their fundamental freedoms and this authoritarian and totalitarian threats are coming from an unexpected quarter – the Temple of justice that ought to be totally apolitical, professionally independent and to a very large extent, must be measured in all its media outings so as not to be perceived as biased or even remain insulated from ‘channel noise’ in the media of mass communications.”

HURIWA stated thus: “We are shocked and disappointed that the Chief Justice of Nigeria seems to have opened a new Vista of publicly joining politicians in serial media squabbles. The choice of words by the Supreme Court’s statement on Monday which described the CUPP’s allegation as “blatant falsehood, misinformation and malicious rumor being generously peddled by the Coalition of United Political Parties (CUPP) through its spokesman, Imo Ugochinyere is discourteous and uncharitable and should not emanate from such a respected quarter as the office of the Chief justice of Nigeria because the media Statement was clearly couched in a manner that paints the hallowed temple of justice as a platform and arena of political battles”.

” The conclusion by the Chief justice of Nigeria that CUPP “is not and can never constitute itself into an agency of the Nigerian Judiciary or assume the role of an alternate Supreme Court of Nigeria” has further heightened the suspicions of political biasness on the part of the holder of the office of the Chief justice of Nigeria. Is he not aware that even his predecessor in office got removed by a petition originated by a private individual who is not an agent of the Supreme court of Nigeria? Or is the alleged politically motivated petitioner who got the last Chief justice of Nigeria Justice Onnoghen removed an agent of some cabal inside the National judicial Council? This fact should tell the Chief justice of Nigeria that the Supreme court of Nigeria is not an island unto itself that information no matter how unbelievable and some times credible, would be leaked to non-initiates from even within the confines of the office of the Chief justice of Nigeria. The statement from the CJN said, “The constitution of any panel to sit on a matter in the court is the sole prerogative of the Supreme Court and it is never an issue for the court to debate on the television or pages of newspapers. But the Chief Justice of Nigeria can not stop Nigerians from making references to conventions and traditions in the selection of the panel of justices to adjudicate over a matter of high public interest. The Supreme court of Nigeria is the apex of the judicial system and a branch of government specifically donated the judicial powers of the federation under section 6 0f the constitution. But under section 22, the media or indeed any citizen can lawfully exercise the constitutionally guaranteed freedoms to raise issues of high public interest happening within the Judiciary because the Judiciary is not made up of perfect beings in the form of Angels who are infallible and whose decisions or authority can not be analysed. Not at all. We are in a constitutional democracy and not in a monarchy, oligarchy or Tyranny and we even have a binding national FREEDOM OF INFORMATION ACT.”

“HURIWA believes that since the Supreme court of Nigeria with their own mouth asserted that ‘We are not a political party or social club and should never be dragged into any form of baseless pedestrian discussions that will drive valid reasoning aground’ why then did it choose to dance naked in the political arena by brandishing threats against the group only for expressing their opinions?”.

HURIWA is as interested as most citizens to ascertain that qualitative justice delivery takes place and we welcome the assertion by the Chief justice of Nigeria that as soon as the Presidential Appeal Panel is constituted, the public will be duly informed as the Supreme Court is not a secret society. But may we in all honesty tell his Lordship the Chief justice of Nigeria that he can’t use his high office to issue threats or intimidate Nigerians only for exercising their fundamental freedoms. If he feels that his rights are infringed or his standing in the society maligned, he can privately institute a libel suit but must never abuse his power by unleashing an avalanche of threats against perceived dissenting voices.”

Coronavirus cannot take away our hope at Easter. – Obiano

7 thoughts on “HURIWA to CJN: Don’t dance naked in the political arena:”