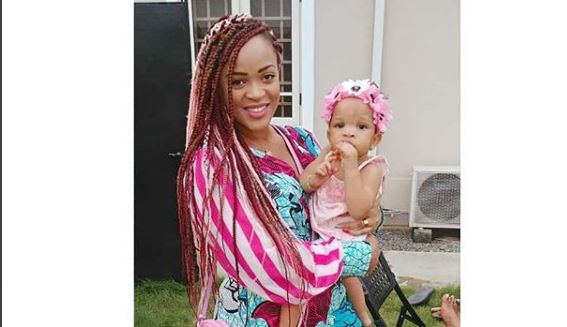 Wife of former Super Eagles player, Joseph Yobo, Adaeze Yobo, has gone through lots of pains which only she and her family knew about and decided to keep silent about but thank god all is well.

She comes out every time putting on that smiling face yet many do not know that even with the affluence her hubby has, life sometimes tries to play fast one on her as she almost lost her baby girl due to wrong test result from Nigerian hospital.

Celebrating her baby Lexine, who turns one, she disclosed that she almost had almost aborted her due to scan result which indicated that she had Fibroid from two different hospital.

According to her, a�?Ia��st scan showed it was Fibroid, 2nd scan (diff. hospital) showed it was Fibroid and pregnancy but an incomplete abortion (whatever that means) but that I had to flush you out, which I (thought) i did. A week later, i still felt sick so I called the Dr. and I was scheduled to surgically complete removal of the remaining tissue. On my way going, the Holy Spirit directed me to go to another hospital which I did and was told you were still inside and I had no Fibroid. instead of being happy, i cried and worried whether to keep you or not, worried if you will be normal after all the drugs n all. look at you now baby girl lexine is one today.a�?

Birthday Celebration: Ayo Olaiya Thanks God as he Advances in Age Today