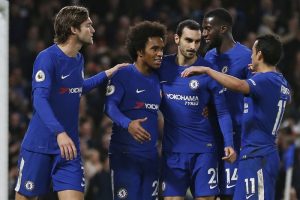 American businessman Shahid Khan has said he will do a�?everything possiblea�? to give Chelsea the option of using Wembley as a temporary home if his A?500 million ($698 million) bid to buy the iconic London ground is accepted.

England’s governing Football Association confirmed Thursday that Khan, the owner of Chelsea’s local London rivals Fulham, as well as the NFL’s Jacksonville Jaguars, had made an offer to buy the national stadium.

Tottenham Hotspur, like Chelsea a London-based club in the Premier League, are currently using Wembley as a temporary base while a successor ground to their White Hart Lane home is built.

Chelsea want to redevelop and increase the capacity of their Stamford Bridge ground in west London.

The Blues are set to vacate their home at the end of the 2019/20 season and it may be up to four years before they are able to return.

Wembley’s 90,000 capacity makes it an obvious choice for Chelsea, particularly as the 82,000-seater Twickenham, the southwest London headquarters of English rugby union, has been ruled out of the running.

Khan’s plan to stage even more gridiron games at Wembley, and maybe even base the Jaguars there permanently, could complicate matters for Chelsea.

But Khan said he would welcome the Blues playing at Wembley a�� for the right price a�� having made it clear he has no intention of moving Fulham, pushing for promotion to the Premier League from the second-tier Championship, out of Craven Cottage.

a�?Absolutely we would discuss it with them (Chelsea) and really encourage them because that is part of the tradition and stewardship of Wembley, just like with Spurs being there this season,a�? Khan told Friday’s edition of the London Evening Standard.

a�?Chelsea would be welcome to use it
a�?Obviously, they would be paying for it, just like Spurs did, but I think it is really important because our goal is to get the usage up and that would be part of it,a�? he added.

a�?Could it happen for four years? Obviously you would have to move things but from our viewpoint, we would love that to work.a�?

10 thoughts on “I am ready to let Chelsea play at Wembley if A?500m stadium bid accepted: Khan”