‘I am right’ – Sarri unmoved on Kante position

‘I am right’ – Sarri unmoved on Kante position 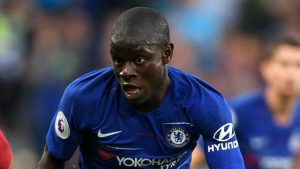 The France World Cup winner helped Leicester City and the Blues to the Premier League title in successive seasons playing at the base of the midfield.

But Sarri has installed his trusted lieutenant Jorginho,  who arrived at Stanford Bridge alongside the manager from Napoli,  as a deep-lying playmaker this season – with Kante pushed further forward.

And though Jorginho was badly exposed in the  3-1 defeat to Tottenham  last month, Sarri is yet to be convinced to re-install Kante to his regular position.

“We have a squad for this kind of football,” said Sarri ahead of the trip to Brighton on Sunday.

“If you play 4-3-3 in my style of football, then the central midfielder is a very technical player. Jorginho is very fast in the mind.

“He is able to play one touch or two touch. Fabregas also is technically really very good.

“I think that Kante in my style of football has to play [further forward].

“I can understand that somebody might think something different but if you think to my football, you have to say that I am right.”

Last weekend’s victory over Manchester City  went some way to masking over that loss to Spurs, with goals from Kante and David Luiz ending the champions’ unbeaten start to the campaign.

It provided evidence that while Chelsea might not challenge for the title this term, they have made progress since the departure of Antonio Conte; a point they can cement at the Amex.

“For us it is a very important match” the Chelsea boss added.

“We need to confirm our motivation and determination like we showed in the last match.

“We need these qualities with continuity because every match is three points.

“We need to improve, improve a lot. I agree this match for us is really very important.

“Maybe it is the most important in this season at this moment.”

9 thoughts on “'I am right' – Sarri unmoved on Kante position”