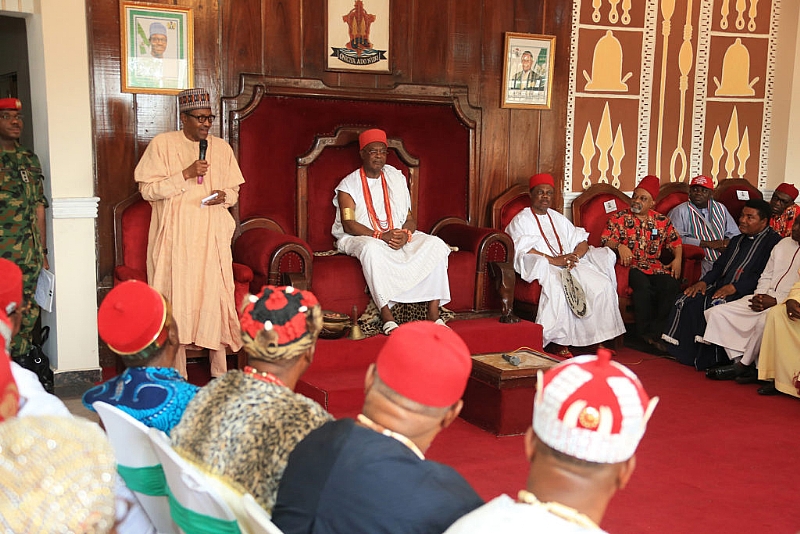 President Muhammadu Buhari on Thursday said he appointed heads of security agencies in his government purely on competence and merit.

The president said this while addressing the Obi of Onitsha, Nnaemeka Achebe, and other traditional and religious rulers at the palace of the monarch in Anambra state.

Buhari was in the state to campaign for re-election. The president made the comments in response to allegations raised by the traditional rulers about the marginalisation of the South East states, particularly in the military.

Buhari, who commended the courage of the leaders in speaking their minds, told them that he had been fair to all the regions of the country since his assumption of office on May 29, 2015.

“I am pleased that you have the courage to present issues about your constituency but I expect you to be more patriotic in your presentation,” he said.

Buhari said he appointed most people into the country’s security architecture without knowing them personally, except based on their professional records.

“I think I tried to be fair. And you can ask these ministers. I never asked them how are they running their parastatals, the boards. I appointed them and I trust them. I allow them work.”

He said the same complaints from the South East have been coming from other parts of Nigeria but that they do not reflect the truth.

“I don’t have to tell you what noise the other states are making especially when compared to the votes I got in 2015. So, I think I try to be fair.

“Those of you who were in the military even in the Biafran Army, know that the entry point is the same and you go for basic training, until you go to your formations or institutions whether it is Army, Navy, AirForce or the police.

The most competent or senior person is the one that gets there. “If there are half a million soldiers, only one man can be the chief of Army staff at a time. This is so for the rest of the troop. In recruitment, we make sure that by states, people are recruited. At least, this is what I do, people are recruited from each state. For those who manage to get recruited, it’s up to them to get to the top if they are professional and work for it.

He said even the current acting Inspector General of Police, Abubakar Adamu, was appointed based on merit.

“The same thing with the IG, that one was appointed last week. I don’t think I have ever seen him, I follow records. So, appointments in the Armed Forces and other law enforcement agencies depends on individual performance after recruitment not where you think you come. At least between me and God, this is what I do,” be Buhari said.

On infrastructure, Buhari said his government has done a lot for the south east region.

“On the issue of infrastructure, a lot of you that are here know that the last time the Enugu/Onitsha road was done was during the PTF days and it was also done again from Enugu to Port Harcourt,” h Buhari said.

He urged the traditional rulers in Anambra state to support the government in improving the security situation of the country.

Buhari pleaded to the people of the south east to vote for him in the February 16 election.

Speaking on the fight against corruption, the president said going forward he would jail all those who have over the years run down the fortunes of the nation.

He vowed that no individual found to engage in corruption will be allowed to go free. He attributed his slow pace in prosecuting alleged treasury looters in the country to the need to follow due process of the law, but assured Nigerians of his commitment to restoring the dignity of Nigeria while he serves as president.

Governor Willy Obiano of Anambra state, who also spoke, thanked the president for releasing N30 billion for the completion of the second Niger Bridge.

He also commended the president for the government’s intervention on the Enugu/Onitsa road, and the on-going Onitsa/Nsukka road.

36 thoughts on “I appointed service chiefs based on competence and merit…. Buhari”