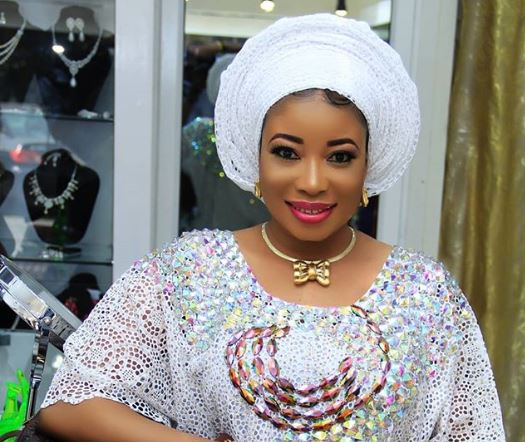 A lot of people don’t really know the true story behind Nollywood actress, Lizzy Anjorin, taking to Islam after several years of being a Christian.

The actress, who has finally decided to let people into somethings about her life, took time to explain the challenges she went through in the hands of the so-called Christian Pastors which were very annoying and shameful.

She revealed that when her mother died, no pastor of the 10 men of God called was ready to help in the burial as they all claimed she was not part of their member.

In her words, when mama died, “They called almost 10 Pastors, once they look at Mama’s face. She is not our member. I was mad at everything and it almost turned into riot.”

While standing there in shock staring at her mother’s corpse, she was later fortunate to find a good Pastor who accepted to bury her mum. “We approached one God sent Pastor. He said, okay, he will help out but (…..) and even the coffin seller tripled his money. He brought the coffin around 2am. Mama was buried around 5am in the morning. But it was an Alfa that did the prayer for my mum.”

“Then a guy said if Mama were to be a Muslim, they would have buried her before I arrive. It was that day I realised….that if you have money with no good savings or lands. You are a joker. Where you are buried, is where you will rest for ever. You live in High rise buildings and your grand kids can’t locate your tomb. Its awful….I swear. The so called Muslims were all over me and they stood by me. The 8days prayer was done by Muslims. Right there, one of the Alfa called me and said to me I heard you are the only child of Mama. Make sure you go to Hajj, talk to God and pray for your mother. Big thanks to Alhaji Dapo and Alhaji Ayegbami that arranged for my 1st trip to Hajj and Alfa Aremon that taught me some Arabic which I use to pray in Hajj and behold to God be the glory am a living witness. I never regret going to Hajj or I never regret going to Hajj or being identified with Islam but I love my Christian brothers/sisters. Because, they opened their doors for me many times when the hustle was real even till tomorrow. Thanks to everybody that has helped me to be strong. We will all live long in good health to witness success of our kids Insha Allah. Amin.”

49 thoughts on “I Never Regret going to Hajj…Actress, Lizzy Anjorin”