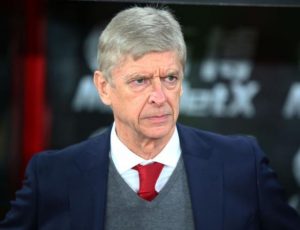 Arsene Wenger says all his decisions, good or bad, at Arsenal Football Club were for the fans.

He said although he still has much to offer, the fans were unhappy with the club’s performance, hence his decision to leave at the end of the season.

Wenger has been at the helm of affairs at Arsenal for 22 years.

The Frenchman spoke on his imminent exit from the club after Arsenal defeated West Ham 4-1 on Sunday.

He said the tributes from the football world after his midweek announcement gave him a dose of a�?what it feels like to diea�?.

Here’s the full transcript of the post-match press conference monitored by  BBC.

On the fans singing ‘One ArsA?ne Wenger’
I’m happy when our fans are happy. I’m even ready to suffer to make them happy. If sometimes, they make me happy as well then I’m happy. I’ll take it. Every single decision I’ve made in my 22 years is for the good and the sake of Arsenal. Even when it was the wrong decision, my one priority was to do well for the club.

I tried to influence the club on the structural side, on the development of the individual players and of course the style of play and results. To combine the three is not always easy and I believe that I will leave a club that is in a very strong position on all fronts. My target was always to do that and I give an opportunity to the guy who comes in after me to do even better in the next 20 years. That’s my wish.

No. It’s not my decision. I always feel that the most important thing in a football club is that everybody does his job. My job is to take care of the team, of the results and of the finances in the transfers. That’s what I did. My job is not to select the next manager.

On why it’s the right time to leave
I made a statement. That is basically all in it. Overall, I don’t think it’s the moment to come out on that. I would like to focus, to keep the priorities right until the end of the season and focus on how well I can do until the end. I will speak about that a bit later in my life.

No, not really. It’s a mixed feeling. First of all I must say that I’m touched by all the praise I’ve got from all English football and I’m grateful for having that experience in this country. That for me is very special. The football is special, the passion is special and you’ll find that nowhere else. I know that I will not get that anymore in my life.

Of course, that is absolutely special and the fact that I could see the development of the Premier League in 20 years is sensational. I hope that will last a very long time. After that I had the feeling a little bit [like this was similar to] my funeral because people speak about you and how you were, so it was a little bit interesting on that front. I don’t need to die anymore because I know what it’s like! That is quite interesting but I must say, apart from a little sense of humour, I would like to thank everybody who has been nice to me. It’s our job because I certainly got more praise than I deserved and maybe sometimes more criticism than I deserved. It has been difficult but also fantastic.

On when he knew he was leaving
It’s not the moment to talk about that.
On what changed his mind over respecting his contract

I just told you a few minutes ago that I would talk about that one day but it’s not the right moment.

On whether he will manage again in England

If you’re speaking about emotions, that certainly would be for me emotionally difficult. I don’t know how well I will live without that so at the moment its difficult for me to say never. But at the minute I speak to you, I’m too attached to this club to say I would go anywhere else. It’s too difficult for me.

On whether it’s hit him that he will be leaving

I will never completely leave this club, because my first look will always be for Arsenal and how well the club develops. I will always be attached, but it’s difficult. You do not give 22 years of your life like that. I gave the best years of my life to this club. I arrived at 46 years old and I worked seven days a week a�� not six or six and a half. Seven for 22 years! You cannot just walk away and say thank you very much and bye bye, it is absolutely normal. You cannot be on one side completely committed and after walk away like nothing happened a�� it’s impossible. I know I will face that challenge and that it will be difficult for me. But I had other difficulties in my life and I hope that I will get through this one as well.

On whether he hopes that his announcement has boosted the club

I don’t know. The club needs to prepare for the future and the earlier and more settled it is, the better. You cannot come in on 1 June and say look we separate now and do what you want.

On whether he wants to retire or work elsewhere

Maybe a�� I don’t know. It’s new for me. With Sir Alex Ferguson it was different, I agree with you. He’s still at the club though, he stayed at Manchester United.

On whether he wants to keep coaching or go upstairs

Honestly, I can’t tell you much because I don’t want you to come back to me in six months and say that you lied to us. I know I did that a few times, but I would like to be definite today. I don’t know how I’ll respond to that situation.

On what the club needs from the new manager

Look, you take me and take a guy who’s much stronger in every strong point that I have!

On whether he felt relief in his announcement

We will try you know, we play against Atletico Madrid and it is very open. Hopefully, we can continue to have positives results until the end and then we will see where we go from there.

On unity
I have nothing more to say. I feel this club has a fantastic image and for me that is absolutely vital.

We can speak and speak and speak, sport is about winning and losing and you have to accept that you can lose games but it is about something bigger than winning and losing. For me that was always a worry, how the club is perceived worldwide for kids who play in Africa, in China, in America and the dream it can create for young children who want to play football and all of our clubs have a responsibility in that.

On whether fans hurt the club in that sense

I’m not resentful and I do not want to make stupid headlines. I’m not resentful with the fans, I just feel if my personality is in the way of what I think our club is, for me that is more important than me. That is what I want to say, it is nothing to do with the fans, the fans were not happy I can understand that, that is my job and I have to live with that, I can accept that. I don’t know if it was damaging but it was not corresponding with what I really feel our club is perceived and has to be perceived all over the world. I travel a lot and this club is respected all over the world and that is down to work and as well to the way we play football, the way we behave and the way we treat people. I want that to go on and to be respected and give the image I think is right. There is a lot of money in the game but above that is more than money, more than results, it is the way a club is perceived and the example a club gives all over the world.

11 thoughts on “I now know what it feels like to die, says Wenger on imminent Arsenal exit”