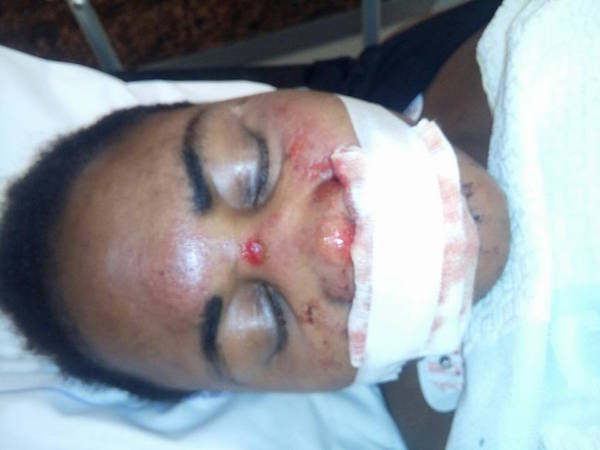 An Edo born Pastor living in the Netherlands has denied beating his wife or pushing her down the stairs, claiming he only pushed her hand.
Vivian is battling for her life after she fell on the stairs after an argument with her husband, Pastor David Steven.

As the photos started going viral, Mr. Steven recorded a Facebook live video where he denied beating his wife or pushing her down the stairs.

In an attempt to debunk the reports, he claimed he had a misunderstanding with her when she came back from an African event.

Scroll down for a video of the man defending himself…

He added that he tried being romantic before opening the door for her. However his wife mistakenly slipped off and hit her head on the floor. He concluded his story by advising men never to assault their wives.

He also advised ladies not to ever lay their hands on their husbands.

“The truth is that I didn’t lay my finger on my wife. I didn’t beat her. I cannot beat an enemy like that. I can not lay my physical fist on her. I didn’t beat her. She fell in the steps and hit her face on the ground. How I wish I could fly ahead to save her but the truth is I couldn’t. There is only one question I ask; why should such a thing happen,” the man of God said in the video.

Later, he contradicted himself saying: “I was scared she could attack, she may grab my male organ and that may be very dangerous because of the way she was very wild so to try to protect myself I push her hand away and she was in the stairs, very close to the stairs. I pushed her hand side ways and she slipped.”

“Before the ambulance came my wife rushed to the street and was shouting I want to kill her I want to kill her. Very strange. She has been to the police before in the past because I called the police because of domestic violence she was using against me. They came and took her away one time like that,” he added.

In another video captioned “Vengeance for vivian from God because this is a set up of the evil one. Proverb 10: 18,” he said he doesn’t care what they say about him, adding that the only thing that matters is what God says about him.

He said: “Vengeance from God for Vivian. Whoever wish Vivian dead, may they die in her place this nihgt. Holy Ghost I am declaring. There are enemies and there are witches and wizards. If you put your hand in the mouth of a lion the bone can never come out with it. Whoever wish Vivian dead. If I am the one, if I premeditate what happened to Vivian may I never see tomorrow. But whoever that decided to kill her or decided to set everything up for it to be like the husband has killed his wife may they never see tomorrow.”

We will  raid kidnappers hideouts in SouthWest -Police

15 thoughts on “"I only pushed her hand" – Nigerian Pastor in Netherlands denies pushing wife down stairs (PHOTOS, VIDEO)”