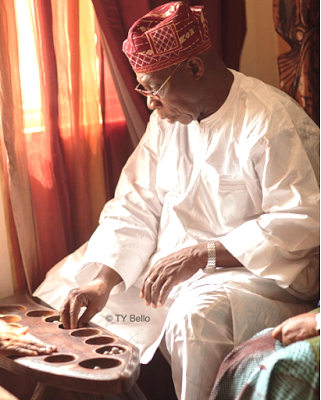 Former President Olusegun Obasanjo has been in the news lately – like he always is at least every four years. This time, word on the street is that Baba Iyabo has forgiven his former Vice President Atiku Abubakar and would be supporting his 2019 presidential bid on the platform of the Peoples Democratic Party (PDP).

While this comes as no shock given the fact that Obasanjo has been vocal about his displeasure over the generally disappointing performance of the administration of President Muhammadu Buhari, it is a pity that something similar happened 4 years ago when the 2-term civilian president publicly tore his PDP membership card and started frolicking with APC chieftains, a friendship that saw them play a football match to celebrate his birthday… an eyesore to proper football lovers like me.

This behaviour is not new and has become the norm in recent past as major politicians cross-carpet from one party to another depending on what side of the political divide is more favourable to their political ambition. What this means is that barely any politician is campaigning on ideals, just party platforms. That is a topic for another day.

Back to Obasanjo. As a veteran of the Nigerian political scene, Olusegun Obasanjo has proven to be a master “game player” and showed me how much of a game player he actually is when I recently went to pay him a visit with a friend.

So I had just returned from a weekend getaway at Tarkwa Bay on the invitation of my friend, Joey Akan and was trying to get into the work mode. Thankfully Monday, August 20th and Tuesday, August 21st, 2018 were public holidays so I still had time to cool off a bit.

While I was at it, I got a call from Onyeka Nwelue: “How are you?” he asked excitedly. “I’m somewhere in Lekki,” I replied, happy to be hearing from Onyeka after a while. “I’m at Terra Kulture,” he announced “come through let us go and interview Obasanjo for my documentary.” Without any hesitation, I replied “I’ll be there in a few minutes”

I still had not changed clothes from my weekend trip. I had just a T-shirt, a pair of jeans and slippers on me. I thought about going home in Ajah, then returning to Terra Kulture but laziness got the better of me. Fortunately, a colleague of mine, Abass was in the office. I quickly begged him to give me the pair of sneakers he had on. I also grabbed a sweater a found on a colleague’s chair (Ada still doesn’t know this ever happened). With my borrowed “swag” I hurried to Terra Kulture where Onyeka was waiting with another friend.

Not long after I had sat down, Onyeka offered to buy me Obasanjo’s autobiography – MY WATCH – an offer I gratefully accepted since I had been dying to own the book for a long while. Soon enough, we headed for a hotel in Ogudu where we met up with the rest of the crew going to Abeokuta.

By 5am the next day, our team of 9 had packed our bags and started heading for Abeokuta. In about an hour and half, we arrived at the Olusegun Obasanjo Presidential Library. By 6:45am, some of us were in his penthouse office where the one-time military Head of State was engrossed in game of ayoayo (ayo) with a friend of his. We watched as Baba continued the epic board duel.

While we waited, an American diplomat (I’m not exactly sure I remember his office) walked in and joined the waiting while Baba continued his game. After about an hour of waiting, we were told to go and come back in the evening as Obasanjo began receiving visitors.

We seized the opportunity to take a tour of the place. We explored his bamboo grove, the hilltop and the zoo – at the zoo, we saw several animals but the funniest I saw was the lion. The not-so-wild cat was not as big as the ones we see on TV and was even dorning a flat tummy that women all around the world would kill for. Hunger had gotten the better of its ferociousness and it just lay there like a pregnant housewife. I could have sworn that the lion would not have had an issue with feasting on a meal of eba without soup!

While we were waiting, several groups and individuals drove in and out of the library complex to see the former President. From politicians to different groups of stakeholders representing different parts of the country (I saw an 2 Igbo groups, an Ijaw group, 2 groups from the North, and a Yoruba group)

After more than 12 hours of waiting, we finally made it back to Baba’s penthouse office where he was engrossed in the same ayo game he was playing in the morning. I and Onyeka got in and took our seats at about 7:30 pm and Obasanjo continued playing this game for another 2 hours before his PA signalled for us to call in the rest of the crew to join us. Finally, we were having the interview, Onyeka discussed a number of issues with Obasanjo, mostly about the civil war, Nigeria and Wole Soyinka. What amused me was when Obasanjo said he has all of Wole Soyinka’s books but does not read them… how petty can you get?

When we were done, we took photos and bade Baba farewell. He probably went back to playing his beloved ayo game. Not that I have a problem with playing games, it just dawned on me how many decisions affecting the lives of millions of Nigerians have been taken while playing that game, or worse still, how a few players use the country as their console as they play game after game, seeking personal gratification. One of the games involves Obasanjo and the two front-runners for the 2019 election – President Muhammadu Buhari and Obasanjo’s former Vice President Atiku Abubakar.

If I am correct, there is virtually no chapter of Obasanjo’s book (after he left prison) where he doesn’t talk about Atiku. Not just does he talk about him, he reveals one dirty deed or the other. If we are to take Obasanjo to be a man of his words, Atiku Abubakar has no business being Nigeria’s president whether Obasanjo forgives him or not. Obasanjo is not Nigeria and mending fences with Atiku does not change him from being the desperately corrupt person Obasanjo painted him as in his book. But no, Nigeria is a jungle where anything goes and a blood-thirsty vampire can minister to a congregation because he’s friends with the Vicar.

While this should not be misconstrued as support for President Muhammadu Buhari as his government has been nothing but a monumental failure (not like I expected better), it is an evident lack of integrity on the part of Obasanjo to publicly support Atiku’s bid. He could have kept mum and watched from the sidelines rather than “go back to his vomit” so shamelessly. This vomit-loving syndrome is what has turned our polity to nothing but a game of interests without value. The same people – Atiku, Bukola Saraki, Dino Melaye, Rabiu Kwakwanso, Obasanjo and their ilk – are the ones responsible for chasing Goodluck Jonathan from Aso Rock and installing the hugely ineffective Buhari. Now the same people are on the #Atikulate bandwagon singing choruses of prosperity for Nigeria under Atiku.

Nigeria has become a country groping in the dark seeking solutions to problems she should never have had if it’s leaders do not toy with Nigerians every four years. But what do I know? I am just a young man who recently learnt how to play ayo! Maybe one of these days, I’ll join in playing games with the lives of millions of people and not just the pebbles in my hand.

Proliferation of Political Parties as Counterproductive to Nigerian Democracy

15 thoughts on “I Visited Obasanjo And Learnt How To Play Ayo!”