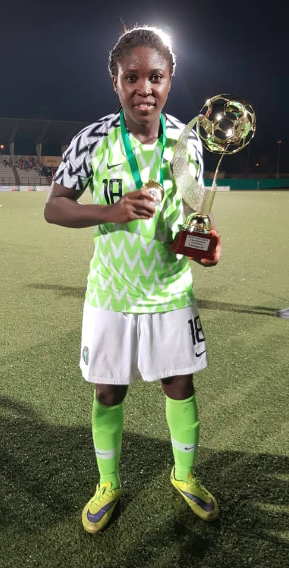 Super Falcons striker, Rofiat Sule has revealed how she started playing football as a young girl among boys before becoming a professional footballer.

Rofiat Sule won her first Trophy for Nigeria in the WAFU Zone B Women’s Cup scoring three goals in the competition as the Super Falcons defeated Ivory Coast in the final.

“Then, when I was in primary school, I love playing in the midst of boys,.But my dad mustn’t see me playing, because he really wanted me to focus on education

“It was when I entered secondary school, I decided that i wanted to become a professional footballer because i prefer to play football and forget about food”

“I Want to become a Footballer”.. “My classmates will laugh at me as if i don’t know what i am writing.”

The Bayelsa Queens striker is back in training with The Restoration Girls ahead of the 2020 NWPL season.

Sarri has same intensity and mentality as Guardiola: Pedro

Ndidi will be okay ahead of World Cup: Leicester Coach

7 thoughts on “I Was Mocked For Choosing Football – Super Falcons Star, Rofiat Sule”