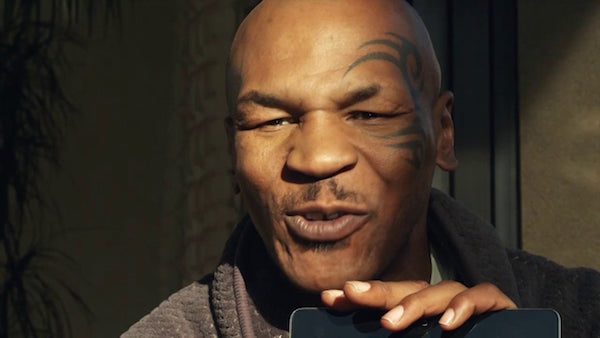 Boxing hero Mike Tyson has opened up about the horrific sexual assault he suffered as a child – and how the it made him ‘tough for the world I lived in.’

The father-of-eight had previously described how he was walking down a Brooklyn street aged seven years old, when an ‘old man… snatched me off the street.’

He was ‘bullied’ and ‘sexually abused’ before he eventually managed to run away. Tyson never saw his abuser again and never told anyone, including the police, about the abuse for decades for fear he would be judged.

On Monday, he opened up about the incident to ESPN’s Jeremy Schapp, and how he has come to terms with the abuse.

Although he was reluctant to go into too much detail, telling Schapp he would ‘like to keep that where it was in the past’, he said:’ I was molested as a child.’

When asked why he so rarely mentioned the incident, he replied: ‘It was no one’s business to know, people just don’t talk about it because to some people they believe it’s demasculating them.

‘I learned that it doesn’t make you any less of a man because it happened,’ he said.

Despite himself, the former boxing champ said he ‘probably’ felt shame over what happened to him.

But he said the incident had made him the man he was today.

‘It made me have to be tough for the world I lived in,’ he said.

Tyson first publicly revealed he was sexually abused in an interview on SiriusXM’s Opie Radio show in 2014.

The 51-year-old described how the ‘old man’ had ‘snatched me off the street.’

‘I was a little kid…[he was an] old man,’ he said. ‘[He] bullied me, sexually abused me and stuff. Never seen him again.’

He managed to escape, and claimed it was a one-time incident.

When asked by the interviewer whether the event changed him, Tyson answered: ‘I don’t know if it did or not.’

He added: ‘I don’t always remember, but maybe I do but I don’t. I’m not ashamed or embarrassed by it.’

Tyson, nicknamed ‘The Baddest Man On The Planet,’ was undisputed world heavyweight boxing champion in the 1980s but in 1992 he was convicted of raping teenage beauty queen Desiree Washington in Indiana and served three years in prison.

He added to his notoriety later in the decade when he bit rival Evander Holyfield on both ears in a 1997 bout, for which he was disqualified and temporarily suspended from boxing. Tyson declared bankruptcy in 2003 and retired from professional boxing in 2006.

Since his retirement, Tyson has appeared in the TV shows Entourage and Brothers, and had a cameo role in the 2009 hit comedy movie The Hangover.

Tyson opened up about his difficult childhood in his 2013 autobiography, Mike Tyson: Undisputed Truth.

Born in Cumberland Hospital in Fort Greene, Brooklyn, in 1966, Tyson never really knew his father. The man on his birth certificate, Percel Tyson was a man he never met.

And the man his mother, Lorna Mae, told him was his ‘biological father,’ Jimmy ‘Curlee’ Kirkpatrick Jr was an infrequent presence in both their lives..

By the time Tyson was seven his mother had lost her job as a matron at the Women’s House of Detention in Manhattan, and she and her clutter of children had been evicted.

As a seven year old, small and nimble he began a career of petty crime – clambering in windows of houses through which older boys were too large to fit to steal whatever he could get his hands on.

His early boyhood took on a relentless rhythm of crime sprees, being hauled in by police only to be taken home and brutally beaten by his despairing mother.

By the time he was 12 he was a ‘zonked out zombie’ on Thorazine and a regular attendee of reformatory school, or ‘special-ed crazy school.’ There are not many light spots in the childhood that Tyson recalls. But one that stands out happened during a stint in the Reformatory school of Sporford.

He recalls: ‘We watched a movie called ‘The Greatest’ about Muhammad Ali. When it was over…we were shocked when Ali himself walked out on that stage, ‘ he says. ‘I thought, I want to be that guy.’

He didn’t want to be a boxer. He wanted to be great.

59 thoughts on “I was ‘snatched off the street’ and sexually assaulted at 7, kept it a secret for fear of being judged – Mike Tyson”