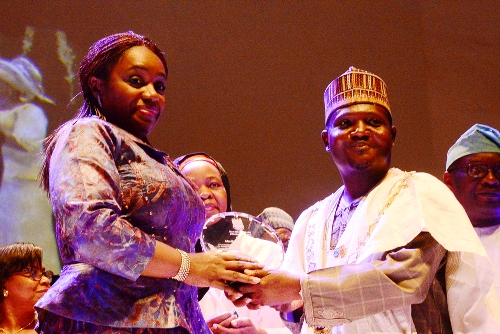 The the Institute of Chartered Accountants of Nigeria (ICAN) on Saturday night honoured the Minister of Finance, Mrs. Kemi Adeosun and Executive Chairman of the Federal Inland Revenue Service (FIRS), Mr. Babatunde Fowler, with the 2018 Merit Award.

The award ceremony was held at Eko Hotel and Suites, Victoria Island, Lagos

Other high profile personalities also honoured by the Institute were: the Akarigbo of Remo, HRH Oba Babatunde Ajayi; Group Executive Director, Finance and Accounts of the Nigerian National Petroleum Corporation, Isiaka Abdulrazaq and a Fellow of the Institute, Mrs. Margaret Unubun.

The University College Hospital (UCH), Ibadan and Fate Foundationreceived the Institute’s Merit Award in the Corporate Category while a Posthumous award was given to Late Alhaji Zubair Abdullah and Late Mrs. Uchenna Ifesinachi Erobu.

The ICAN President, Isma’ila Muhammadu Zakari, said Minister Kemi Adeosun was honoured for her exemplary and distinctive contribution to the growth of the Nigerian economy and leadership quality.

a�?This honour is in recognition of your outstanding contributions to the ideals of our Institute which include: Accountability, Integrity, Honesty, Exemplary Leadership and Nation Building.

a�?Particularly for your selfless service as Nigeriaa��s Minister of Finance and for your roles in strengthening the Nigerian economy and entrenching accountability through the introduction of 22 Points Fiscal Reform Action Plan and the Voluntary Assets and Income Declaration Scheme,a�? the ICAN boss stated.

The Minister has played leading roles in the development of various cost cutting initiatives through the pursuit of carefully thought out policies aimed at promoting transparency in the payment process, drastic reviews of the procurement process, and the sanitisation of the public-sector payroll system which led to the elimination of huge number of ghost workers.

Under her leadership, numerous reforms agenda of the Federal Government had been undertaken such as the Voluntary Assets and Income Declaration Scheme (VAIDS), implementation of Treasury Single Account, implementation of Whistleblower Policy, establishment of an Efficiency Unit, establishment of Development Bank of Nigeria, launch of Asset Tracking and Management Project, and introduction Fiscal Sustainability Plans for States, among others.

Another Adamawa Lawmaker Sacked By Tribunal For Certificate Forgery