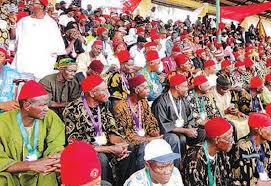 It is no longer news that the multi-term Senator Ike Ekweremadu was attacked in far away Nuremberg, Germany, where the senator had gone, on invitation, to deliver a keynote address at the Second Igbo Annual Convention, by no less a group than his own fellow Igbo people, members of the Indigenous People of Biafra (IPOB). What is disturbing this day is the continued altercation between POB and the south east leaders.

After the incident, leader of IPOB, Nnamdi Kanu, directed his boys to attack all governors and other politicians from the south east wherever they see them outside Nigeria. He went as far as placing a N1 million reward for whoever helps his organisation with the travel schedules of these Igbo politicians.

By that pronouncement, the IPOB leader appeared to have erased all efforts of many who had laboured to convince the world that IPOB was never a terrorist organisation as conceived by the Federal Government under President Muhammadu Buhari.

Indeed, the video of the Nuremberg debacle where supposedly responsible Igbo men were seen descending on Senator Ekweremadu like hungry lions, tearing his clothes, causing and swearing, tends towards lending credence to the Federal Government’s proscription of that organisation as a terrorist group.

The video suggested that it was because they spotted the senator wearing a top that had the Nigerian coat of arms all over it. As a sitting senator, though, Ekweremadu, who knows the prevailing sentiments of the people home and abroad, the distinguished senator, one would say, played into the hands of the angry mob by putting on that attire. There were other fitting Igbo attires that he would have worn for the outing.

On the other hand, the IPOBians would have maintained civility by walking up to him to politely ask him to return to his hotel room and change the attire before appearing in that auspicious gathering. To have taken to violence gives the world an impression that IPOB is not after all the peaceful organisation it desperately claims to be.

To talk about the phobia for coat of arms, curiously, one would ask what passports IPOBians carry abroad, Nigerian or Biafran? Are they regarded as Nigerians or Biafrans by their host countries? If in the course of their stay in foreign land they choose to naturalize there, does it not amount to despise for their father land, Nigeria or Biafra?

Viewed from another dimension, the young men who attacked Ekweremadu simply showed that they had no iota of respect for age, something alien to the Igbo (Biafran, if you like) culture. Yet, a few non-Igbo commentators wondered whether it is not a taste of what would happen should Biafra come to reality.

Some supporters of the IPOB show of shame see it as a revolt against politicians who have run Nigeria aground. If so, why is it not going round? President Buhari was in Japan recently. Some Nigerian officials were in South Africa too. Should we actually say that the Igbo politicians marked for further ridicule are the ones running the country aground, especially in these days of imbalance in federal appointments?

Some say it is democracy in action, considering that the German policemen stood aside and watched while it happened. Wrong. The Germans care less about bloody blacks who decide to kill themselves for flimsy reasons. To them, it’s black killing black. Only a morbid democracy would permit such an assault on a human being which graduated into the tearing of someone’s clothes. What if the fisticuff had ended up claiming the senator’s life? Could it still be seen as democracy, rather than murder?

Those who think it is a revolt against mismanagement of Nigeria fail to take into consideration the existing divergence in opinion between IPOB and Ohanaeze Ndigbo on how the people should react to their seeming marginalisation in a Nigerian state.

No matter how we see the present situation, one thing is clear, that the Igbo nation is presenting before the world a house divided. A house divided against itself cannot stand. Ohanaeze Ndigbo and a majority of the elders believe that the best for the entire Nigerian state is restructuring in line with true federalism, where the federating units retain a greater measure of autonomy. IPOB, consisting of an army of younger bloods, are demanding outright separation from Nigeria, urging the Federal Government to organise a referendum in accordance to international standards. It makes sense, however, that a complete federating unit that is autonomous up to a desirable magnitude must be secured before talks of separation.

Nnamdi Kanu came up with his grouse against the President of Ohanaeze Ndigbo, Chief Nnia Nwodo, and a host of other Igbo leaders, claiming that they conspired with the Federal Government to kill him. It is imaginable that the killing of Kanu would serve any gain to the people mentioned.

There again, we deduce that the IPOB aggression was rather a personality clash than in the interest of a generality of the people and gives a revealing insight into what the IPOB leader and his followership are consisted of.

Let someone convince the larger right-thinking members of the Igbo community on the usefulness of this rascality to the Igbo cause, or even the Biafra cause. At the moment, those who have come in support of the action appear to be thinking like the abhorrent Boko Haram members. “These leaders deserve it”, they say, and they go ahead to allude that the leaders have squandered the resources of the country, bla,bla bla as if the south east governors and politicians are the only ones running Nigeria.

What we fail to think about is whether some people have not hinged their lifeline on the struggle, such that any day Biafra is realised, they lose their means of livelihood. Many of them are spending other people’s money, indeed using it to acquire property in Nigeria and all over the world. And, guess what? A restructured Nigeria along the lines of true federalism is sure to douse agitations for self actualisation and make Biafra unnecessary. So, they would do all possible to be sure the struggle outlasts them.

While the well-meaning IPOBians in exile castigate the leaders of the country, most especially, the south east, they should also begin to interrogate themselves with regard to their tangible contributions to the development of the presently known South East and South South (Biafraland, if you like). How much of the hard currency in their possession have they brought in from their various countries of abode to set up economic concerns in the region to reduce unemployment and raise the standard of living of their people?

Right after the loss of the civil war and an ensuing marginalisation of the region, the south easterners took the bull by the horn, taking bold measures, including seeking greener pastures abroad, to better the economy of the area. It has never been rosy for the region where self-help rather than government largesse is keeping people alive. This is unlike their northern brothers who virtually depend on government for livelihood, as indicated by President Buhari who once castigated the Nigerian youths as lazy.

However, leaders of south east should not relent in pursuing the common good of the people. It is the lap dog of a dignitary that attempts to kiss him in public. In-fighting at this critical time when the region is facing its worst trying times in the contraption called Nigeria does the people no good. Kanu cannot take the support of Ndigbo for granted, knowing that a referendum requires vigorous campaigns to sail through. Without an agreement between him and Ohanaeze, all his appearances at the UN General Assembly or EU parliament will come to naught. Ndigbo cannot afford to turn into a house divided against itself.

Dr. Odu is based in Owerri, Imo State.

VIDEO: How Buhari Government Is Giving What's Left of Nigeria to the Cabal

471 thoughts on “Igbo: A house divided against itself?”