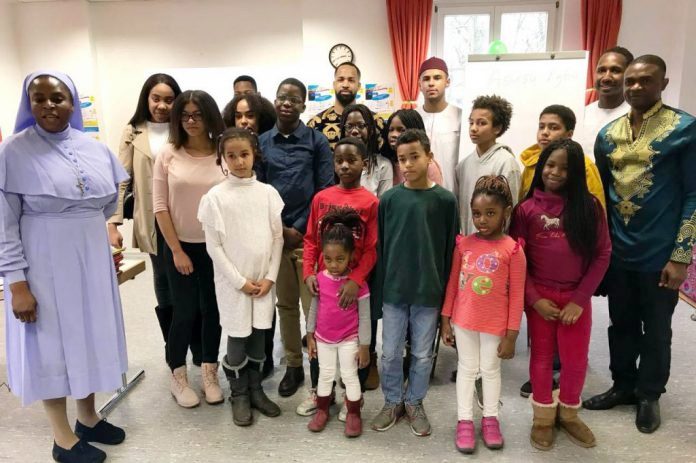 IN a bold initiative, a group has started a school in Germany to teach an African language to children of African origin in the Diaspora.

Saturday, January 20, witnessed the official opening of the Igbo Language School in Frankfurt. Igbo is the language of the Igbo people, one of Nigeriaa��s three biggest ethno-national groups.

The top diplomat, who was represented by Mrs Folasade Sobande, expressed his joy at the opening of the Igbo Language School because of the great importance of preserving Nigerian and African languages. He wished the school success and offered every support the Nigerian diplomatic mission in Germany could give to what, he described, as a�?this noble initiativea�?.

In his keynote speech, Engr Stanley Okoli, Chairman of the Christian Igbo Professional Network, CIPN a�� the organisation that established the school, spoke about the importance of transferring the Igbo language to the next generation. He lamented that many people no longer spoke pure Igbo or pure African languages, but often mixed them with a European language. He explained that once a people lost their language, they ceased to exist as a cultural group.

Special recognition was given to Mrs Chinyere Ogamba at the event for her promotion of Igbo language in Germany. Ogamba already gives Igbo lessons to a small group of children at her home in Essen.

The event featured the inauguration of the first class of the Igbo language school Frankfurt and the introduction of the teacher, Rev Sister Stelphin Nwachukwu.

Speaking with The African Courier, Mr Che Chidi Chukwumerije, Secretary of the CIPN, said the school was open to all children, irrespective of their country of origin, whoa��re interested in learning Igbo. Chukwumerije hoped that other African groups would emulate his organisationa��s efforts and looked forward to partnering with similar initiatives.

The Igbo language, a member of the Volta-Niger branch of the Niger-Congo family of languages, has approximately 24 million speakers in Nigeria and Equatorial Guinea. Igbo is written in the Latin script, which was introduced by British colonialists.

Is the Osinbajo Panel Going To Be Just Another Runaround?

No Contractor Has Abandoned Projects In Delta — Ukah