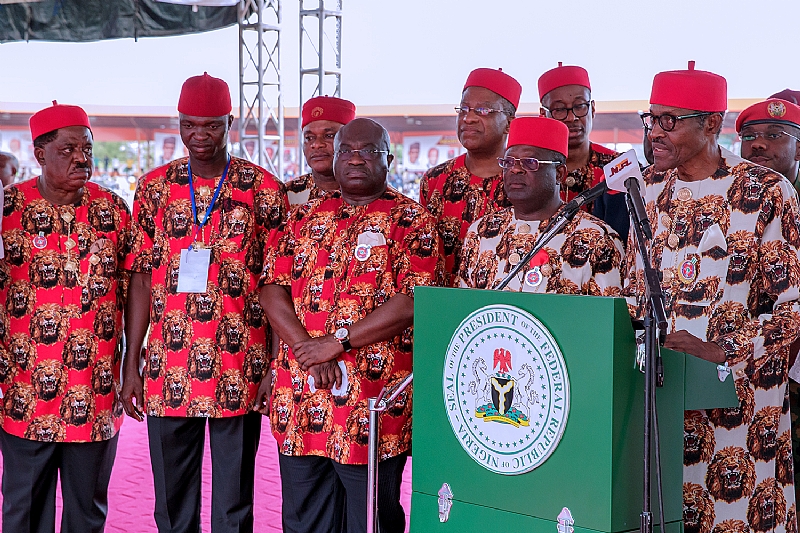 The Igbo ethnic group in Nigeria is one of the three major ethnic nationalities in the country. The others are the Yoruba and the Hausa-Fulani. These three groups dominate and dictate who rules Nigeria, whether it is a military or civilian regime, since the country’s political independence in 1960. To consolidate this domination, the colonial government divided the country into three with each of them in charge of one. The North was given to the Hausa-Fulani, East to the Igbo and West to the Yoruba. There was no south because it will not be in the interest of these major ethnic groups. Consequently, all the peoples of Nigeria who actually belong to the South were shared to the East (Cross River, Akwa Ibom, Rivers and Bayelsa states) and West (Delta and Edo states). Despite the splitting of the South into these six states, as constituted today, the major ethnic groups of Igbo, Hausa and Yoruba comfortably dominate Nigerian politics and dictate who becomes the president of Nigeria.

From 1960 till date, the Igbo has been marginalised by the other major ethnic groups from having its own people become the president of Nigeria. Effectively, the Igbo had ruled Nigeria for only six months (January-July, 1966 under late General JTU Aguiyi Ironsi). The Yoruba had ruled for eleven years (1976-1979 under General Olusegun Obasanjo rtd; 1999-2007 under Chief Olusegun Obasanjo). The Hausa-Fulani has ruled for thirty six years (1966-1975 under General Yakubu Gowon rtd, 1975-1976 under late General Murtala Mohammed, 1979-1983 under Alh. Shehu Shagari, 1983-1985 under General Mohammadu Buhari rtd, 1985-1993 under General Ibrahim Babangida rtd, 1993-1998 under late General Sani Abacha, 1998-1999 under General Abdusalami Abubakar rtd, 2007-2010 under late Alh. Umaru Musa Yar’Adua, 2015-2018 current President Mohammadu Buhari). The remaining eleven years were ruled as follows: 1960-1966 shared by Igbo-HausaFulani under late Chief Nnamdi Azikiwe and late Alh. Abubakar Tafawa Balewa, 2010-2015 by Dr. Goodluck Ebele Jonathan from the South.

This marginalisation has been extended to the present civilian regime since 1999. The Peoples Democratic Party (PDP) divided the country into six geo-political regions with six states in each. It is only the South-East Region occupied by the Igbos, that has five states and this has been at the disadvantage of the Igbo, compared to the political mathematical advantages it gives to other regions with six states. Unfortunately Igbo politicians and elites are not interested in reversing this disadvantage so long as it does not diminish their access to state funds for personal use. Indeed it is this group of politicians and elites that have effectively frustrated the Igbo from having access to the position of the President of Nigeria. Yet, other Nigerians cannot remove the fact that ordinary Igbos feel saddened and frustrated with this fact which from time to time, leads these ordinary Igbos to demand for their own country called Biafra.

So, where is the solution? Which political party is in a better position to concede its presidential slot to the Igbo in 2019 or 2023? Although in politics, no one is given a political office without a fight, but at times it could be given or allowed to assuage and arrest future negative political feelings and actions. That was why the idea of rotation or zoning of key political offices was created, especially in a very hyperbolic and heterogeneous political societies. Also, in some cases, some political parties may allow some group of people to have access to key political positions in order to harvest acceptance and votes from that group for the political survival of the party.

Looking at the key political parties in Nigeria today, the Igbo do not have any chance in the PDP to produce a President of Nigeria come 2019 or 2023. This is because that position has been zoned to the North by the party for 2019 and it affects 2023. For the ruling All Progressives Congress (APC), it is likely to present President Mohammadu Buhari (PMB) for election in 2019. Consequently, come 2023, the North under the APC, may not present a presidential candidate. Will it go to the West, the likely answer is no because they had been Vice President under PMB. Again giving it to the Yoruba in 2023 would add salt into the marginalization injury suffered by the Igbo since independence. To give it to the Igbo will at least assume to heal this long inflicted injury and favour the APC. Therefore, come 2023, the slot should be made available to the East (Igbo). The most qualified Igbo politician should be Dr. Ogbonnaya Onu, the current Minister of Science and Technology. He has been the key Igbo politician in the APC, which was the amalgam of three major political parties: the Congress for Progressive Change (CPC), All Nigeria Peoples Party (ANPP) and the Action Congress of Nigeria (ACN). He was until then, the national chairman of the ANPP. He was the first civilian governor of Abia State in 1992. He is a simple and sincere politician with lots of integrity. He is a very marketable candidate in all parts of Nigeria.

If 80% of Igbos in Nigeria vote for Dr. O. Onu as the presidential candidate of the APC in 2023, and with some added sympathy votes from the rest of Nigeria including my humble self, the long dream of the Igbo to rule Nigeria especially after the civil war, will be achieved and APC as a political party will survive the political earthquake called Nigerian Politics.

The South is a threat to Nigeriaa��s democracy