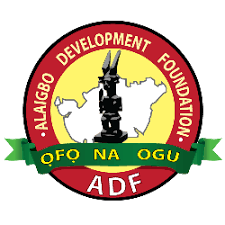 At the three days annual retreat which ended in January 8, 2020, the Alaigbo Development Foundation, ADF, has lambasted the Nigerian Government or failing to recognise the contributions of Ndigbo in Nigeria, ADF President, Professor Uzodinma Nwala recalled the role he played along with other Igbo sons and daughters during the 1999 constitutional conference, Nwala said despite the efforts of Ndigbo, the Nigerian state has failed to accommodate them.

In his words, BOT Chairman of ADF, Bishop Obi Onubogu also stated that the retreat is not a retreat in surrender, he recalled the role he played during the Biafran war, even as he hinted that ADF is on the side of emancipation of Ndigbo, the retreat was held in Owerri, Imo State.

It witnessed the present of notable Igbo sons and daughters home and abroad including the leader of the Movement for the actualisation of the sovereign state of Biafra, MASSOB, Chief Ralph Uwazuruike.

Getting Nigerian Farmers into the Mainstream of Nature Farming

63 thoughts on “Igbos has never been conquered, says ADF (Video)”