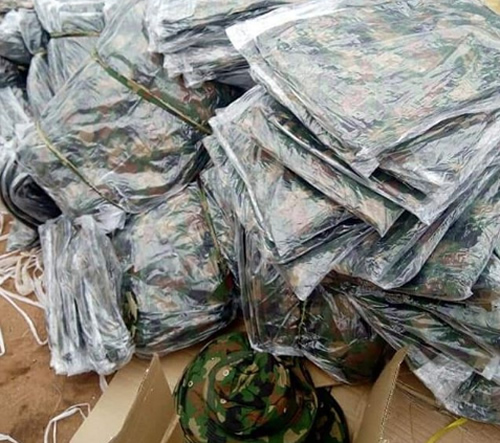 The Abia Police Command has impounded a large quantity of military uniforms allegedly imported from China and stocked at a warehouse in Aba, the commercial hub of the state.

The State’s Commissioner of Police, Anthony Ogbizi, made this disclosure at the Umuahia Central Police Station on Tuesday, while briefing newsmen on the achievements recorded by the command in the fight against crime and criminality within the last two weeks.

Ogbizi said that the owner of the warehouse, one Michael Onuoha, was arrested for alleged conspiracy, aiding and abetting the unlawful procurement, importation and possession of the uniforms, which were mainly camouflage.

He alleged that the Managing Director of U.U Iruoha, one Uche Iruoha, popularly called Urchman, shipped the uniforms in a container to Apapa Port, Lagos, from where they were transported to Aba in March.

The police commissioner said one of the suspect was arrested on Aug. 16 while the other is still in China.

The Commander, 14 Brigade of the Nigerian Army, Ohafia, Brig.-Gen. Abubakar Ibrahim, who accompanied the police boss at the briefing, said the army was worried over the development.

Ibrahim said that it was disturbing that unscrupulous persons wear military uniforms and camouflage to commit crimes.

He said the Nigerian Army was collaborating with the police and other security agencies to check the phenomenon and ensure that perpetrators were arrested and brought to book.