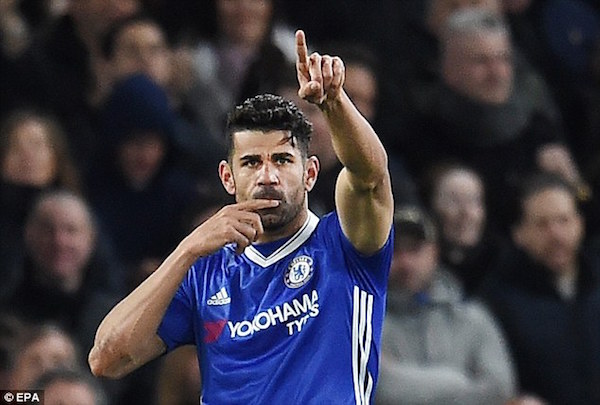 Chelsea striker Diego Costa has revealed that he is leaving the English champions.

The Telegraph reported today that Costa said on Wednesday night that Coach Antonio Conte has told him to find a new club.

Costa, who has been linked with moves to China spoke after Spain’s match against Colombia on Wednesday night.

According to the striker,  Conte had said he had no place in the team’s plans for next season.

“I’m a Chelsea player, but they do not want me there,” Costa said.

“Antonio Conte has told me by message that I do not follow at Chelsea and that’s it. Conte said he did not count on me for next season.”

Costa added: “My relationship with the coach has been bad this season. It’s a shame, I’ve already forwarded the message to Chelsea people to decide.”

Costa scored 20 goals in 35 appearances as Chelsea won the Premier League last season but rumours regarding his future persisted with reports of him wanting a return to former club Atletico Madrid.

Any move is made more difficult, however, by the fact Atletico have recently had a transfer ban upheld and cannot sign new players until Januray.

“I do not know, it’s complicated, but people know that I love Atletico a lot and that I love to live in Madrid,” Costa said.

“It would be nice to go back, but it’s difficult to be four or five months without playing. It’s a World Cup year and there are many things to think about. I need to play, just that.”

Costa has also been linked with a move to Chinese Super League club Tianjin Quanjian, whose owner said in January that he had tried, unsuccessfully to sign the player.

10 thoughts on “"I’m a Chelsea player, but they do not want me there": Diego Costa leaving Chelsea”