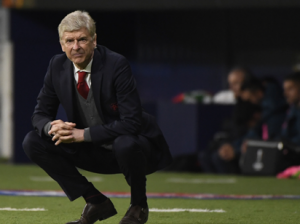 Arsene Wenger was left devastated by Arsenal’s Europa League defeat to Atletico Madrid on Thursday but made a staunch defence of midfielder Mesut Ozil.

Ozil’s performance was heavily criticised by former Arsenal defender Martin Keown, who said the German had cried a�?crocodile tearsa�? after the game, and was a�?not fit to wear the shirta�?. Diego Costa’s strike proved decisive at the Wanda Metropolitano where a 1-0 victory secured Atletico a 2-1 win on aggregate and a place in the final against Marseille. Defeat ends Wenger’s hopes of leaving Arsenal on a high as his team missed out on a shot at a major trophy and squandered their last chance to qualify for the Champions League. a�?I’m very sad tonight,a�? Wenger said. a�?Unfortunately you have to go through that a�� the game can be very cruel, sometimes very nice, but the suffering is very strong tonight. a�?Looking at the chances over the two games the least we could say is we are very frustrated. The tie should have been over in the first game.a�? It remains to be seen how another season outside Europe’s premier tournament will affect Arsenal’s search both for a new coach, and new signings, this summer. a�?The club now has to think about what to do for next season,a�? Wenger said.

a�?I think there are some good ingredients in our team and they will bounce back. With the right additions in the summer I think they can compete next year.a�? a�� ‘We expect better’ a�� Keown, however, was less optimistic and reserved a particularly harsh assessment for Ozil.

a�?He wasn’t fit to wear the shirt tonight,a�? Keown told BT Sport. a�?I’ve seen this a lot this season and it needs to be said. He needs to be dug out. We expect better from him. a�?These are crocodile tears I’m seeing from the player. He’s not conning me.a�? Keown added: a�?I bet he doesn’t play again this season. He’ll have some emotional breakdown and won’t play this weekend.a�?

When Keown’s comments were put to Wenger, he said: a�?I don’t agree with that. You will see that he gave a lot. It was a difficult team, physically very intense. a�?I’m convinced that Ozil should not be criticised by anyone just because he did not score. We had plenty of opportunities and we lose as a team.a�? Wenger also delivered an update on the fitness of Laurent Koscielny, who had to be carried off on a stretcher in the 12th minute after the defender went down, with nobody near him, clutching his left Achilles. Arsenal and France now face an anxious wait.

a�?It doesn’t look very good, it’s his Achilles,a�? Wenger said. a�?You can always hope for a miracle in the scan but if he has a ruptured Achilles, his chances for the World Cup are non-existent.a�? Costa was the star of the show, providing the tenacity and killer instinct Arsenal so desperately lacked. a�?Costa came back here for nights like this,a�? Atletico coach Diego Simeone said. a�?To be important, to lead from the front. This side needs an aggressive striker and that’s exactly what he is.a�?

Big four step in to save Force