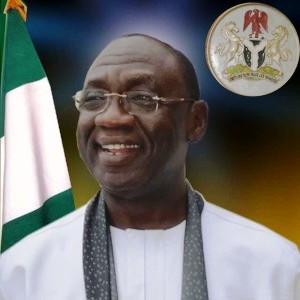 Imolites, you could recall that this article was published a week after Sir Jude Ejiogu was relieved of his position as SSG. Today, he is a guber candidate in APC. No one can stop him because it is his constitutional right and nothing is wrong about it but I am just republishing this to tell you that I am a political prophet and if ndi Imo had listened to me in 2010/ 2011 when I started writing about Gov. Rochas and his intentions in Imo state, we would have avoided where we are today. I am not against Sir Ejiogu but…

Baltasar Gracian (1601-1658) authoritatively warned that one in a power seeking position should a�?avoid outshining the Master. All superiority is odious, but the superiority of a subject over his prince is not only stupid, it is fatal. This is a lesson that the stars in the sky teach us- They may be related to the sun, and just as brilliant, but they never appear in her company.a�? This is also the first Law of Power elaborated by Robert Green- Never Outshine the Master, and in transgression of this rule, Governor Rochas Okorocha wants to play tricks on the bundle of the Masters of the game- Imo elites, grand politicians, clairvoyants and perspective planners. This art of displaying his talent and to outshine his Masters, he has lanced in the present sack of Sir Jude Ejiogu, the Secretary to the State Government (SGI) and his former Chief of Staff.

What are the power play and game behind Jude Ejiogua��s sack? Was he stubborn? Did he do like Nicolas Fouquet, Louis XIVa��s finance minister who in playing games to outshine his master not only lost his position, but his freedom as well for decades? Did anybody in Imo State hear any squabbles between the Governor and the SGI? Or are top political appointees under him from Owerri zone doomed to have same fate- Sir Jude Agabaso (Deputy Gov) and now Sir Jude Ejiogu (SGI)? Why is it that barely eight months, Imo has had two SGI- Prof Anthony Anwuka and Sir Jude Ejiogu? Is that sit hot for Okorocha that he sends them away as such? Perhaps, why he removed Prof Anwuka was to make him the Nyeson Wike of Imo State or to take him far, far away from the corridors of local power tussles so that he can secretly plot his game and shine at the end. All these are speculations and possibilities.

The issue is that Jude came as the SGI and now Okorocha has sacked him, and the only reason for sacking him is that Okorocha wants somebody to cover his all ills at his departure, and has thus perfected plans to use the purportedly sacked Jude Ejiogu for the classical power game-plan. Thus, in stead of being sacked for any degree of wrongdoing, what Okorocha wants to do is to package him (Sir Jude Ejiogu) for absolute self-replacement in 2019, and during election, Okorocha will be pretentiously projecting somebody else, and every person will think that Okorocha is actually and heartily supporting such one; without knowing that he will be secretly sponsoring Sir Jude Ejiogu.

In this classical a�?the more you look, the less you see game-plan,a�� all eyes will be out on Sir Jude Ejiogu given the impression of the present day sack, and there will be paper works on Jude Ejiogu saying that he did this or did that. The reason of the calumny will just be to make sure that people remove their eyes from Sir Jude Ejiogu.

The issue now is that the same person he sacked- Sir Jude Ejiogu, Governor Okorocha like his former colleague, Governor Godswill Akpabio, may be preparing for Imo 2019. And people may not know. The game thus is such that if Sir Jude Ejiogu emerges as the Governor as Okorocha projects, he will cover the ills of Okorocha, because the Rochas we know would want somebody that will perfectly cover all his ills to avoid post-power wrecks by anti-graft agencies, and thus to be planted there as the Governor of Imo State.

But even at that, as Jude Ejiogu is sacked, does the sack remove Okorochaa��s political blood from running in him- Jude Ejiogu? The theory of influence from masters cannot be exonerated from this, and as the French say- Tel papa tel fils, like father like son.Sir Jude thus has all these qualities of his master Okorocha and must accomplish the will of this master. The only remedy to this is for all eyes to be on Jude Ejiogu, because anything about Okorocha should not smell the Government House come 2019, as Okorocha and all his cronies must leave. Imolites are the bulk masters of the political game-plan and must not be outshone; it is a transgression of the law to power that you cannot outshine the master and survive the antics.

Being the Imo State Governor, Okorocha is a nominated master amidst the great game-masters that allowed him rule over them, and now he is trying to use a well-known technique in order to play on their intelligence, purporting to have problems with Sir Jude Ejiogu. And what problem is he having with him? There is nothing- From Chief of Staff to SGI and from SGI to nothing, as he is now sacked. Is it that Sir Jude Ejiogu will pose a serious challenge to him in 2019 or is it that Governor Okorocha is preparing him for 2019?

Is it that he told him to step aside and prepare him so that people will think they are quarrelling, and secretly prepare and package him for 2019, while bringing another person and being deceived, people will be looking that it will be Mr A while his mind and focus is on Mr B. Because if it seems they are quarrelling, nobody will take proper cognisance of Jude Ejiogu, and thus Jude will emerge and still cover the ills of Okorocha.

As this is no speculation but revealed power game-plan of the Imo con artist and Governor who wants to outshine all Imolites who are his master, Imolites should collectively rise and focus their eyes and searchlight on Sir Jude Ejiogu (as his number one candidate for Imo 2019) and all Okorochaa��s appointees and allied forces. The only person that Imo should know in 2019 must be a neutral and different person. Thus, any person that has under Okorocha been SA, PA, Commissioner, House of Assembly or House of Reps member and Senator must not be considered or nominated as gubernatorial candidate; otherwise these evils as witnessed in this administration will never be stamped out.

Thus, a different person who has not tasted power should be brought in to sanitise that system and governance in Imo State, and that is the only way Imo can move forward. All these people clamouring for power should not even think of possessing it; Imo should bring a different and neutral person who will convert the Sphilbat to be the new Government House and not the converse of making a personal multi-billion house Government House Annex as Okorocha did and all State funds vanish in broad daylight.