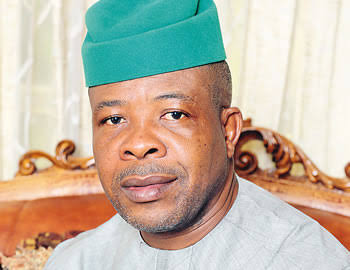 The chances of the governorship candidate of the Peoples Democratic

Party, Rt. Hon. Emeka Ihedioha has continued to swell ahead of the

2019 general elections, as the Ezuruezu Mbaise, the apex socio

cultural organization of Mbaise people threw its weight behind his

governorship bid.
At a well attended annual general meeting of the apex body, held, Friday, at the Ezuruezu Mbaise Hall, Aboh Mbaise LGA, with very notable leaders of Mbaise in attendance, including governorship

candidates of other political parties such as Hon. Tony Nwulu of the

Democratic Party, (SDP) and Sir, Stanley Amuchie of the All

honor and facilitated the development of the area. He cautioned against any attempt to project the agitation for an Imo State governor of Imo State of Mbaise extraction as a parochial or clannish sentiments. He urged all the governorship candidates of Mbaise extraction to, “embrace the waving of rights and demonstrate that Mbaise has a solid candidate that can rebuild Imo State and return her to her lost glory. Let us demonstrate to the people of Imo State that the candidate we are backing is one with unbeatable qualities and records”.

Earlier in his address, the Chairman of the occasion, Chief Mike

Ahamba SAN, noted that 2019 is an important year for every patriotic

Mbaise man or woman. He said, “the right of every person nominated by a political party to contest the governorship election is undisputed

and infact and in law, undisputable.
The senior advocate, enjoined Mbaise people to with one voice, get an

acceptable and reliable son or daughter of Owerri zone to the Douglas House.

Also in his remarks, the President General of Ezuruezu Mbaise, Barr.

Cyril Anyanwu, harped on the need for all sons and daughters of Mbaise, irrespsctive of their political party affiliation, to respect the Egbu Declaration, which resolved that a governorship candidate

from Owerri zone must occupy the Douglas House in 2019 and wen further during the Is anniversary of the Declaration to adopt Rt. Hon. Ihedioha as it's candidate for the 2019 governoship election.

In his remarks while moving the motion for the adoption of Hon.

Ihedioha as sole candidate of the Mbaise nation Chief Norbert Obasi, enjoined the people to rally behind him as he is the most suitable candidate following his pedigree and track record of achievement and

structures on ground to achieve victory at the polls next year.

In their separate reactions, former Minister for Foreign Affairs, Prof. Viola Onwuliri, PDP House of Representatives Candidate for Ahiazu/Ezinihitte Federal Constituency, Chief Emeka Chinedu and former President General of Ezuruezu Mbaise, Dr. Okey Aguwa, described the development as a timely and a step in the right direction, noting that the state will be well governed with Ihedioha at the helm.

Reacting on his adoption, Rt. Hon. Ihedioha, thanked the people Mbaise for the confidence reposed on him by the entire Owerri Zone and assured of his readiness to liberate the and rebuild the state from ruins of the present administration.