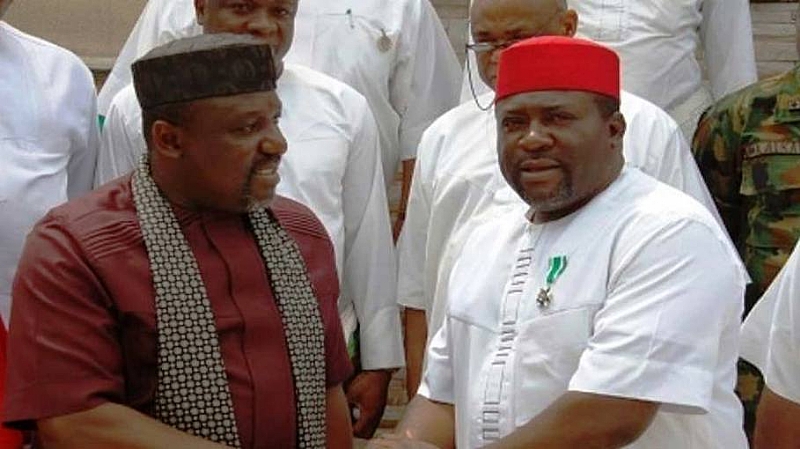 It is no longer news that since the declaration of intent by the Deputy Governor of Imo State, Prince Eze Madumere to contest the Imo governorship election in 2019, his boss, Governor Rochas Okorocha has been undermining his efforts, vowing to do everything within his powers to whittle down the rising profile of his Deputy.

The Governor of Imo State at various meetings, with those he described as members of his agburu (lineage), has lamented over the decision of his deputy not to key into his project of imposing his son-in-law, Hon. Uche Nwosu on Imo people as his successor, labeling Madumere as one of his arch enemies.

Madumere has superintended and successfully managed Governor Okorocha’s political dynasty for well over two decades. Along the line, he succeeded in building for it solid base with widespread followership. His unflagging loyalty and humility to the Imo governor have also been noted in the right circles. However, both the boss and the loyal disciple seem to be operating on different wavelength now on the issue of ambition. Yet, Madumere said repeatedly that he is not in any way quarreling with his boss only that he differed with him on personal agenda and vision to govern darling Imo State ahead 2019. The Deputy Governor is convinced that given the chance to govern, Imo would be taken to where it ought to be.

Governor Okorocha while endorsing himself for Imo West Senatorial, advised his Deputy to also proceed to the Senate, an offer Madumere politely turned down, insisting he has the requisite experience, exposure and vision to be the next governor of Imo State. Regrettably, many misinterpreted Madumere’s standpoint as a rebellion, fuelling suspicion that he had parted way with the outgoing governor. He has kept denying insinuations that he is out to engage Governor Okorocha in a political duel.

Quoting one of Owerri based tabloid, in his clarification, Madumere said; Make no mistake to believe that I am in the race for personal vendetta. God forbid. I bear no grudges. At least you all know that I have served meritoriously and that by my training I am a seasoned Administrator with exposure like no other.

I have operated at the higher echelon in the private sector starting from corporate America to Nigerian private sector and then to the public sector. And by the special grace of God, I have excelled in every responsibility I have ever been assigned to handle together with the ones I took up myself.”

However developments in Imo polity have shown that all may not be well after all. There are indications that some landmines had long been laid against the Deputy Governor, as the governor considered him a stumbling block to his intention to install his son-in-law who many believed is inexperienced, nonchalant, fun-loving and knows nothing little governance. The image of Okorocha’s son-in-law in the minds of Imolites is that of a man enmeshed in mind blowing deals, which brought him to the status of an overnight wealthy man. On the other hand, Prince Madumere is seen to be contending with the antics to repress and deflate him ahead of the next governorship election. He is being starved of fund based on a paltry monthly allocation for his office as revealed by a local tabloid. The Governor’s son-in-law is said to have been part of the deal to bring down Prince Madumere. Some sources quoted him as boasting about how he has been able strip the Deputy Governor of the power due to his office including shutting him out of major meetings and ensuring that his aides are impoverished.

In the same vein, Governor Okorocha at various occasions has openly tried to dehumanize and undermined his Deputy. Part of his antics include frantic efforts through his son-in-law to woo electorate from Mbaitoli local government area with a view to making the number two citizens look as though he has no political grip of his local government. The governor and his henchmen, against this background, have dangled carrots and given out cars in the process. One of the attempts to penetrate the local government lately had caused some bloodletting with many injured through with gun shots fired at a desperate crowd. According to the reports, a group from Nwosu’s office had deceitfully invited Mbaitoli women and youths in the guise of empowerment from the Governor only to get there to realize it was an invite from Governors son-in-law for inauguration of members at the local council, a move the youth considered an aberration and resisted.

These onslaughts against the deputy governor include verbal attacks and name-calling. Governor’s rancorous Chief Press secretary who had some time ago described Madumere as having no political value is leading the attack. In another media outing, Sam Onwuemeodo said he would win Deputy Governor even at his ward, an attack people described as provocative.

Again, Ward Party Chairmen have been poached at various points. The last of such was the promise of plots of land, N5 million and a car for each of them just to attract them to the government for an event to endorse Nwosu. This has been generating rancour in the polity. The story ended in disappointment as the Chairmen claimed they were deceived since they could only get N700 each for their transport.

The most recent effort to break the Deputy Governor’s gut came with the setting up of Mbaitoli New Management Committee on Roads and Projects, a creation that has no bearing with the realities on ground, according to the people of Mbaitoli. The Committee had visited the local government last week claiming the governor was worried that nothing much had been achieved in the Deputy Governor’s local government with so much allocation of fund.

Before now, Governor Okorocha had at different fora talked about Deputy Governor’s effort and pleas to him to come to the aid of his people over poor road network in his local government, which have been causing pains for the people with and collapse of socio-economic activities in the area. The governor and his men were merely playing the Pontius-Pilate. This is because among all the major roads, only Obazu-orie mbieri, orodo were rehabilitated to an extent. However, the deputy governor had played a vital role to ensure that contractors utilised whatever resources approved for the said job.

What many found most annoying about the Committee according Mr. one Mr. Uche Cornelius is that all the members are drawn from the office of the Chief of Staff, a son-in-law to the Governor. Many believed the idea of the Committee was a height of provocation against the deputy governor. Some of the members of the committee are: Mr Daniel Nwafor, Godstime Samuel, Ugochukwu Onwusereaka, Prince Odunze as the Chairman and they are all personal aides to the Governor’s son-in-law and are all from Mbaitoli local government area of Imo State.

What is more, there have been attempts at various times to impeach the Deputy Governor, which has failed following an outcry from the people of Imo State.

Developments within the Imo All Progressives Congress (APC) at the moment has reached a feverish pitch while plans by the Governor to change all the party executives and replace them with those loyal to his son-in-law has started creating ripples within the party. At the moment stakeholders are vowing to resist the plan even with their blood.

Meanwhile, Prince Eze Madumere may not be alone in the whole conundrum as there plans to reshuffle, which is targeted at rooting out those who are not compliant to the project of foisting Governor’s son-in-law on the people of Imo State.

On his part, to make real his poise to become the next Governor of Imo State, Prince Madumere has made himself more visible than ever as he attends strategic events and mending fences where necessary. The Deputy Governor has been seen playing with those who were said to be Okorocha’s enemies including those who threatened to leave the party in frustration.

A very close aide to Okorocha who has been part of his political dynasty who spoke on condition of anonymity from Mbaise described Madumere as a very focused man who is ready to endure whatever onslaught; and would be the last person to be cowed or distracted when he is on a mission he believes in. “We know him. Governor Okorocha knows he has lost somebody. We thought by now that the Governor should have dropped this idea of son-in-law succeeding him. Yes, Madumere can be loyal but not when he has served a friend and partner so humbly only to be treated like a fool by using person who he picked up to and brought to Okorocha. I am sure this is only to perpetrate himself back to the government through the back door. We were there. The best thing is for Governor Okorocha to rescind this idea of family. I am sure he does not like APC ordinarily I am sure he knows that his son-in-law is the last thing that will ever sell in Imo State. Well, we are watching event; he submitted.”

Efforts to reach deputy governor’s media aide, Uche Onwuchekwa, to react proved abortive as at the time of filing this report.