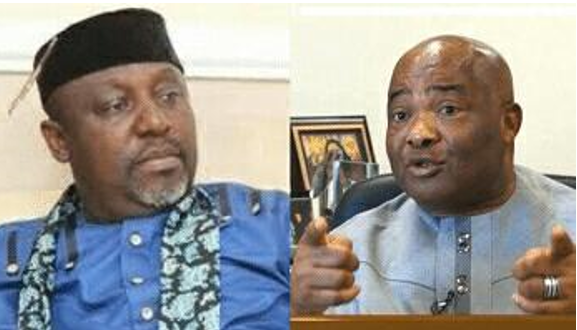 The Governor of Imo State, Rochas Okorocha, has said it would be difficult for him to convince Imo people to vote the governorship candidate of the All Progressives Congress, APC, Senator Hope Uzodinma.

Okorocha said this in a statement made available to reporters in Owerri by his Chief Press Secretary, Sam Onwuemeodo.

It was in reaction to a report where Hope Uzodinma was quoted as saying that Okorocha would be sanctioned for not supporting his (Uzodinma) candidature.

Okorocha blasted the lawmaker, saying that Uzodinma was suffering from “self inflicted problems.” The statement added, “Adams Oshiomhole’s preferred governorship candidate for Imo State, Chief Hope Uzodinma has launched repeated media campaign of calumny against Governor Rochas Okorocha and giving the impression that his problem as the gubernatorial candidate of Imo APC is the governor.

“The major problem Chief Uzodinma has is self-inflicted. “Imo people who are going to vote on Election Day know him and he has the choking problem of how to convince them to vote for him to become their governor.

“The latest story on the APC candidate is that he has been banned from travelling out over allegation of treasury looting. It was not Okorocha who slammed the travel ban on him.”

9 thoughts on “Imo 2019: Okorocha slams Uzodinma – You Are Near Impossible To Market To Imo People”