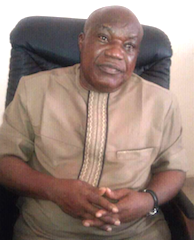 The Caretaker Chairman of the Imo State Chapter of the All Progressives Congress, APC, Chief Marcellinus Nlemigbo has described the Supreme Court ruling returning Senator Hope Uzodinma as the duly elected governor of Imo State as the triumph of democracy and urged Imo citizens to join hands with the governor to provide democracy dividends for the people.

Chief Nlemigbo who spoke with journalists in his office in Owerri on Wednesday, said the Supreme Court verdict represents a final victory for Imo people made possible by God, to whom every glory and adoration belong to.

He said that by this final verdict, Imo people should now brace up for uninterrupted flow of prosperity to be driven by the Governor Hope Uzodinma Administration, adding that the time has come for all Imo citizens to come together in the interest of the State and join the governor in his efforts at repositioning the state.

“I am excited that the Supreme Court has finally laid to rest this governorship tussle that has derailed development efforts of Governor Hope Uzodinma. For me, this is a triumph of democracy and justice. For me, there is no victor, no vanquished. It is a victory for Imolites irrespective of party affiliation,” Chief Nlemigbo said.

The Supreme Court had in a decision by a seven-man panel of Justices led by the Chief Justice of Nigeria, CJN, Justice Tanko Muhammad, reinstated the judgment it gave on January 14, which declared Hope Uzodinma as the validly elected governor of Imo State.

In a lead verdict delivered by Justice Olukayode Ariwoola, the apex court held that Ihedioha’s application to set aside the judgment that removed him from office lacked merit, and held that the application was an invitation for the Supreme Court to sit on appeal over its own final judgment.

While dismissing Ihedioha’s case, Justice Ariwoola in his lead verdict held that section 235 of the 1999 constitution (as amended), accorded finality to the judgment that declared Uzodinma winner.

The apex court said it decided to discountenance the preliminary objection Uzodinma filed against Ihedioha’s application to decide the matter on its merit.

“By the provisions of the Rules of this court, it shall not review any judgment once given and delivered by it, except to correct any clerical mistake or error arising from any accidental slip or omission, or to vary a judgment or order so as to give effect to its meaning or intention.

“The judgment or order shall not be varied, when it correctly represents what the court decided, nor shall the operative or substantive part of it be varied and in different form substituted. See order 8 Rule 16 of the Rules of this court.”

Insisting that the judgment of the apex court on the Imo State governorship dispute remained final, Justice Ariwoola said the law might be amended in future to affect issues on the same subject, saying: “But for that case decided, that is the end of the matter.”

“The finality of the decision of the Supreme Court in civil proceedings is absolute. Unless specifically set-aside by later legislation. The justices that man the court are of course fallible, but their judgments are as the constitution intends, infallible.