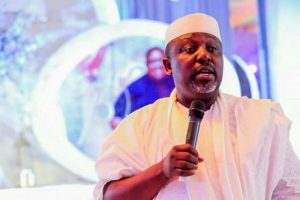 LEADERS of APC in Imo State on Thursday met with Vice President Yemi Osinbajo at the Presidential villa behind closed doors without Gov. Rochas Okorocha.

The News Agency of Nigeria (NAN) reports that Okorocha was not in the meeting although he was at the VP's wing of the Presidential villa at the time.

Okorocha and the APC leaders had been at loggerheads over the result of the May 2 ward congresses held in the state, with the governor claiming that the congresses did not hold.

Okorocha had met with President Muhammadu Buhari in Daura and now the Vice President pushing for the cancellation of the congresses.

After the meeting, the APC delegation had initially declined to speak with State House Correspondents, but changed their mind when they saw Okorocha telling the correspondents that a new date for the congresses would be announced by the party.

“Nobody came to the field, the result sheets was missing and it was traceable to the national organizing secretary's house (Sen. Izunaso) and all of a sudden the chairman of the panel disappeared from his house at 6pm in the evening.

“How could there have been Congress? The matter is being investigated by the security agencies”

Continuing, the governor asked: “If all these have been established why did you (the APC chieftains) have to come with your delegates to see the VP?''

The governor stated that he was not part of the delegation but came for a different thing all together.

However, Mr Theodore Ekechi, the spokesman for the Imo APC delegation and a former Commissioner for Information and Strategy said the meeting with Osinbajo was very eventful.

“We are grateful for the opportunity and privilege to tell the other side of the story.

“I think by our presentations we have successfully deflated all the lies that have been peddled all over the country and within the state.

“I think by our presentation today, we have been able to state clearly that Congresses clearly and really held.

“What did not take place in Imo state last Saturday was simply that we resisted the temptation, the intimidation, the blackmail to write the results of the congresses in the Government House, Owerri.

“What did not take place last week is that we said the old has passed away and things are going to be done anew in Imo State.

“In other words, not one man determines the results of the congresses in the 305 wards of the state. It is very clear that APC has returned to the owners of the party, that is the people,'' he stated.

Ekechi continued: “You saw all those who came with the Governor, his son-in law and newly recruited commissioners.

He also mentioned Ifeanyi Ararume, the immediate past Secretary to the State Government and immediate past chief of staff, and two former commissioners for information and strategy.

Others were the State Party chairman and his deputy, the 25 local government chairmen of the party in the state.