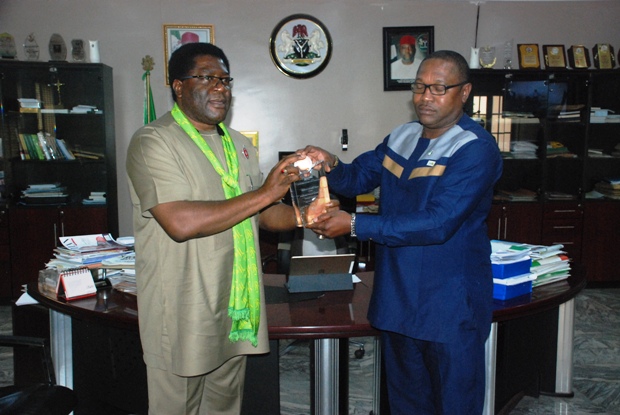 The Imo state Deputy Governor, Prince Ezeakonobi Madumere has called on Imo indegenes abroad to come home and invest ,so as to complement the rescue mission government efforts on youth empowerment and job creation..

Madumere made the call in his office yesterday while receiving leadership excellence award from Owerri senatorial zone development union , Germany.

The Deputy Governor who dedicated the award to the good people of Imo State said the Rescue Mission Government has created an enabling environment for Businesses to thrive in the state, adding that the union should appreciate the level of development recorded by the present administration by investing in the State.

He said Imo state belongs to the Progressives who appreciate the developmental strides of Owelle Rochas Okorocha, adding that it is interesting to know that Rescue Mission administration’s efforts are recognised abroad .

He urged them to create opportunities to help the youths of the State in skill acquisition to equip them for the future as he solicited their continued prayers for the rescue mission administration in its poise to take Imo to greater heights.

Presenting the Leadership Excellence award to Madumere, the Chairman of the union Dr. Victor Njima said the award is in recognition of Madumere’s humility, trust, leadership qualities and excellent services to the people of the State.

The leader of the group said Imo indegenes in diaspora watch with keen interest the litany of Development as recorded by the present administration in the State, adding that such level of development can not be attained without Madumere’ humble relationship and strategic contribution towards the development of the State.

According to him, Owerri Senatorial zone Development Union, Germany, is a non political and cultural organisation with members drawn from the nine local government areas of the Zone, while adding that the organisation also engages in humanitarian services.

Njima said the award is to encourage Prince Ezeakonobi Madumere to continue to work hard as reward for hard work is more work.

One Killed In Kisii County, Kenya As Protests Erupt Over Election Results