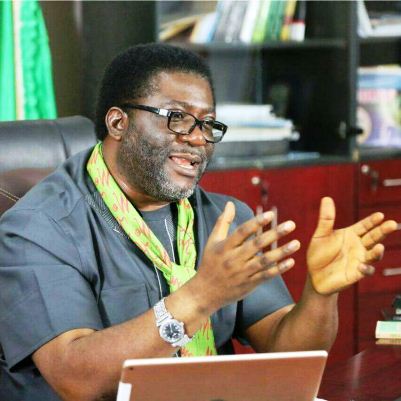 While fiercely plunging Imo State and All Progressives Congress into crises with draconian policies, there are claims that Governor of Imo State, Chief Rochas Okorochaa��s search for means to dent the image of his Deputy, Prince Eze Madumere, over refusal to support Okorochaa��s son-in-law and stance against anti-people policies of the Governor .

Source close to government house alleged that in a bid to whittle down the credibility and integrity of his deputy, Prince Madumere, Governor Okorocha has allegedly detained some staff of Nigeria Erosion and Watershed Management Project (NEWMAP), with a view to forcing them into giving false and incriminating statements against the Deputy Governor.

It was reported that Governor Okorocha had surprisingly called for the arrest of former Project Manager of NEWMAP, Mr. Victor Anueyiagu and Andy Iheagwara Andrew, in the presence of supervising officers of NEWMAP, an action that was embarrassing to the visitors. According to the source, Chief Okorocha in a surprising twist threatened the victims to indict Imo Deputy Governor, which was purported to be the only condition for their release.

The source said the visiting World Bank assisted erosion management officials had insisted the detained NEWMAP State officials be released so as not put the State in bad light and also presenting the Governor as a Dictator who does not follow due process in his actions, which runs contrary to the tradition of World renowned development agencies. Report has it that the intervention of the visiting supervisors who insisted they would not leave until something was done led to the release of the said affected officials.

Not satisfied with Madumerea��s clean bill of health, it was purported that as soon as the visitors left, Governor Okorocha ordered for the re-arrest of the said officials as they were alleged to have been told to frame-up the Deputy Governor with misappropriation of fund of the agency as condition for their release. Our source revealed that the officials testified that the Deputy Governor is innocent, refusing to stand down on their statement.

Our investigation reveals that the arrested officials have been released on bail but have continued to report to the State Intelligence Bureau of Owerri Zonal Police headquarters. The victims who found themselves in the political cross fire are traumatized and with continued threat especially to their lives and family.

It will be recalled that Imo State was on red in the book of international financial institutions and international donor agencies over lack of due process, procurement acts and other enabling laws with allegation of financial misappropriation in one of the health agencies.

Our investigation into Deputy Governora��s relationship with NEWMAP showed that he is innocent and has never signed out financial transaction of the Project. Speaking with one of the staff in the office of the Deputy Governor who prefers to be anonymous, he said: a�?Imo Deputy Governor is a very meticulous person and he is not moved by money. If you like, drop Imo money on his table; he will turn a blind eye to it except it is his. And for the records, on the issue raised, he is just clean. I believe you are sent to find a way to taint the man. I am sure you will not see anything.a�?

However, our source from the Deputy Governora��s office commended Prince Madumere for his vision and administrative prowess, saying that he made the projects which are being enjoyed today by Imolites possible.