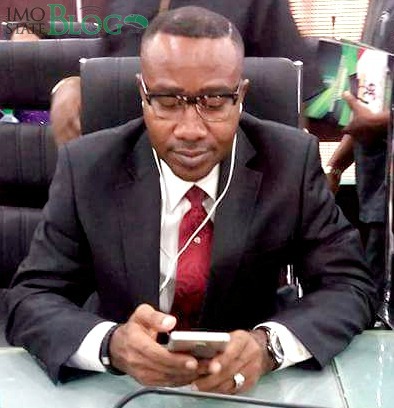 The perceived ambition of the Secretary to the Government of Imo State, Sir George Eche to vie for the governorship position of the State has suffered major setback.

Our impeccable source revealed that Sir Eche has been calling secret meetings with various stakeholders in the State with the aim of securing endorsements from the State Governor, Owelle Rochas Okorocha who seems uncomfortable with his candidature as a result of his immaturity, lack of capacity and required temperament to govern a State like Imo. This has sent shivers to cronies, lobbyists as they received the shock of their life with Governora��s disposition, tacitly describing him as incompetent and a political neophyte.

The SGI had cunningly summoned a meeting of Owerri zone leaders where he came up with an idea of paying New Year visit to the Governor of the State on the advice of his cronies. In a bid to prove to the Governor that he has the capacity to organize Owerri zone leaders. It was gathered that he disrespectfully disregarded the Apex leader of the zone in the person of Prince Eze Madumere, the Deputy Governor of the State so as to have his way not knowing that his plot would boomerang and subsequently lead to political suicide.

Our source disclosed that in one of the meetings with select leaders, a leader from Owerri Federal Constituency had sought an explanation on the reason behind not seeking deputy Governora��s consent, only to be shouted down by one of the cronies of SGI from Mbaise clan, pointing that the meeting only concerned the political appointees. However, it was said that the matter caused serious disaffection among the leaders.

Insisting on carrying on with his plot against the Deputy Governor, Sir Eche and his cronies, yesterday, went ahead with their game plan without bothering to get in touch with the number two citizen of the State, thereby undermining his position.

According to one of the leaders who also pleaded anonymity, he said they were surprised learning that SGI had also included APC House of Assembly members from the zone in the said visit held in Governora��s new lodge, Government House, which he literarily said was only meant for appointees from the zone.

At the meeting with the Governor, Eche playing self-acclaimed leadership role heinously planted his cronies and appendages to prop up his name for nomination for the exalted position of the governor but was met with a heavy resistance by some Owerri leaders, who frontally tacitly, described such attitude as immature and over ambitious.

It was said that one of the leaders who spoke her mind called on the Governor never to consider a new comer known for his greed, oppressive tendencies with unaccommodating spirit for Governorship of the State, while appealing to him to settle for a humble, accommodating, unassuming personality who has labored and sacrificed all the while with him.

According to one of the members of Imo State House of Assembly, name withheld, he described Echea��s ambition as uncalled and inordinate, and warned that his consideration for any sensitive position will spell doom for the State. He however reminded that Echea��s pasts in the service are known especially his role in trying to rubbish the present government by his avarices and other inappropriate actions.

4,000 APC members to decamp to PDP in Katsina