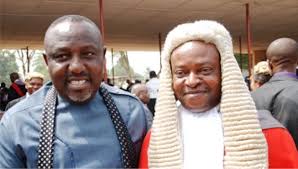 By OFFICE OF THE DEPUTY GOVERNOR OF IMO STATE

From our records, there is no known court of competent jurisdiction that granted such a restraining order on this day, Tuesday, July 31, 2018.

We hereby call on the general public to disregard the said misleading information expressed in the Press Release signed by the Chief Press Secretary to the Governor of Imo State, Sam Onwuemeodo.

The fact is that the restraining order was granted in the early hours of Monday, July 30, 2018 at about 11 am at the High Court 8, Imo State High Court, Owerri, Imo State, during a court sitting presided by Hon. Justice Benjamin Iheaka, where he granted the prayers of Chief Ken Njemanze (SAN) restraining the Chief Judge, Speaker of Imo State House of Assembly, members of Imo State House of Assembly, 7 Man Panel of inquiry among other parties involved in the matter from taking any further action that bothers on the impeachment proceeding against the Deputy Governor, Prince Eze Madumere, until the determination of the matters before it.

We were taken aback by the illegal and shameful action of few members of Imo State House of Assembly led by Rt. Hon. Acho Ihim who, in show of disdainful rascality, embarked on the purported removal exercise despite a court order from a court of competent jurisdiction.

May we inform the general public that His Excellency, the Deputy Governor of Imo State, Prince Madumere, through his lead Counsel, Chief Ken Njemanze (SAN) had filed an Originating Summon with the suit number: How/565/2018; Eze Madumere V Chief Judge of Imo State and 9 others with another motion on notice for interlocutory injunction, challenging the constitutional breaches vis-a-vis the said impeachment procedures which were observed in breach.

For Justice to prevail, hence the invocation of the Court Order so as to create room to ensure that Justice is served to the parties involved in the purported impeachment proceedings and to the public as well.

We therefore call on the Chief Press Secretary to the the Governor, Hon. Onwuemeodo to acknowledge the fact that they erred by refusing to obey the court order, which is tantamount to Contempt of Court punishable by our extant laws according order 48 and 49. We also urge him to honourably accept that the whole exercise was not only shameful, illegal but has made the State a laughing stock in the eyes of the civilised world.

To add salt to an injury, the Attorney-General of the State, Hon. Miletus Nlemadim, rather than acknowledge the illegality of the whole exercise, he chose to feign ignorance of the subsisting Court Order when he was physically present and his position recorded, when Hon. Justice Iheka invoked the Court Order due to his refusal to guarantee that the 7man panel would not sit until the matter before the court is dispensed with for justice sake.

May we state unequivocally that the Deputy Governor of Imo State, Prince Eze Madumere is a leader who believes in the Rule of Law, which is the fulcrum of every civilised and democratic State.

11 thoughts on “Imo Impeachment: Point Of Correction Mr. Sam Onwuemeodo: There Is No New Court Order ”