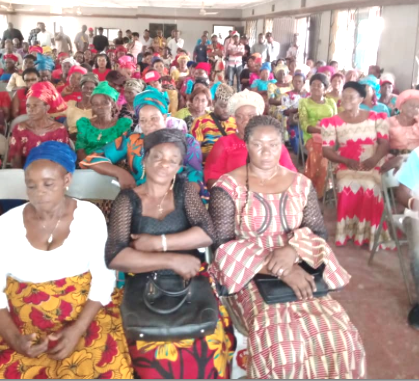 Activities were shut down in Orlu Local Government Area of Imo State yesterday, Sunday 23rd of February 2020 as the All Progressive Congress (APC) held the mother of all meetings after the Supreme Court judgement gave victory to the party and its candidate, Senator Hope Uzodinma on the 2019 governorship election in Imo state.

The Orlu APC secreteriat, situated at the Okporo Youths Hall was filled to capacity and many people were standing by the corridors to listen to the officials and leaders of the party address them. The meeting which started with praise and worship prayers rendered by Lady Rachael Okonkwo (Iron lady) saw happy looking members conduct themselves in orderly manner as messages of joy were delivered to them.

The Orlu APC Chairman, Hon. Greg Nwosu welcomed all and assured everyone that the party, as usual is open and will keep accommodating everyone and also provide level playing ground.

In his address, the Apex leader of APC in Orlu and the General Overseer (GO) of Camp Hope Organization WorldWide, Hon. High Chief Canice-Moore Nwachukwu (Omeogo, Ogbaturuenyi Na Orlu) assured members that our principal and general leader, the executive governor of Imo state, Senator Hope Uzodinma is doing his best to turn things around and bring better lives, good governance and dividends of democracy to the people of Imo state.

He said, Imo state is APC and APC is Imo state. Saying this, he pointed out to the crowd that what happened at the Imo State House of Assembly shows that Imo is APC. He assured them that a man with golden heart in the person of Senator Uzodinma is in-charge in the state hence there is nothing to fear.

The Omeogo who is also Ogbaturuenyi of Igbo land urged members to open their hearts, open the doors, spread their arms wide open and wholeheartedly receive new members and returnees who came and are still trooping back into the party. He said, the party in the state is run by kind-hearted team and our gorvernor is a man of the people and has directed us not to stampede anyone out of the party, but rather we should welcome them. He told the returnees that the party has forgiven them all and asked them to sin no more.

The Apex leader made it clear that APC is one indivisible party in Orlu LGA and presented the people in charge of the party’s affairs in all the thirteen INEC wards of Orlu and advised new members and returnees to go and register as member through the rightful people Manning the affairs of the party. He warned that anyone that is not loyal or registered with the right officials of the party is not a member of the APC in Orlu.

Several Political, business and financial heavyweights attended the meeting. Some of the heavyweights (in no particular order) include:

The meeting entered into fundraising for the running of the party at the local government level with Chief Akpuruka Na Orlu donating the sum of N1,000,000. Chief Akajiugo Na Umuna donated the sum of N200,000. Prince Oscar Okairiro donated the sum of N50,000 and his brother supported him with the sum of N20,000. Prof. Bernard Thompson Ikegwuoha N30,000. Several other donations were received, which saw the party realizing close to N2,000,000 in cash and pledged donations.

13 thoughts on “Imo: Orlu APC Leaders Meet, Says They Are Open to Accepting Decampees, Assures Members of Better Days Ahead”