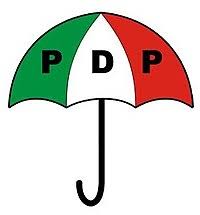 Hundreds of members of the Imo state Peoples Democratic Party, PDP, Monday formed a New- PDP with Fabian Ihekweme as the state Chairman.

The N-PDP, was formed in Owerri, capital of Imo state, at Villa Garden Hotel.

The N-PDP has as Deputy chairman, Jerry Ogoke; Secretary, Ifeanyi Oguzie, while Johnbosco Ben and Christigonus Okoro as spokesperson and Organizing Secretary respectively. The legal adviser is Uche Igbokwe.

They also gave the National Working Committee, NWC, of PDP, on or before 29th of November 2018, to resolve all the issues or face mass defection of members of the PDP to opponents camps.

Giving reasons for the emergence of the N-PDP, Ihekweme said: “How can it be explained that a major political party like the PDP could not return a single female gender out of a total of 42 elective positions that were offered to the party members and even the few women that emerged were brazenly removed at Abuja.

“Again to add pepper to injury, some of the validly elected aspirants in the field that contested for House of Assembly and House of Representatives were fraudulently replaced at the Wadata House without recourse to due process.”

Ihekweme described the activities prior to the governorship primaries of the party that, “What we saw as loyal party members was in fact a subterranean move by one man parading himself as both a leader and agent of the NWC.”

“The whole arrangement was aimed at short-changing the rest of us, into rubber stamping his own emergence as the legitimate winner of the grossly manipulated and flawed process.”

The N-PDP state chairman claimed that, “Indeed what is being tagged as the gubernatorial primary election of PDP, in Imo state is in fact a ruse and an imposition that is totally unacceptable to the generality among the silent majority of party members.

“As electioneering campaigns are starting across the country in compliance to INEC, guidelines and timetable, there exists a compelling reasons to hold our coalition in the beleaguered Imo PDP, together from further drifting to other political locations and it will be utterly irresponsible of us not to create an umbrella that would canopy our interest.”

Ihekweme went further to say: “We want to further sound it loud and clear that Imo state is neither a conquered territory nor a Buffa state where manifesting emperors transverse at will.

“It is the intention of N-PDP in the foregoing, to put the NWC of PDP on notice to immediately commence urgent actions to redress the very issues that brought about the crisis in the party on or before the 29th of November 2018 or be prepared to manage the consequences of a pandemic drift of over 200,000 members.

“Our continued loyalty to our party, the PDP is not in doubt as we move in search of an accommodating and all inclusive solution to the building crisis.”

It was his view that, “It is a known fact also, that the once very peaceful and stable enclave of PDP in Imo has been torn into two parallel and irreconcilable factions since the issue of whom between Senator Samuel Anyanwu and Emeka Ihedioha, actually won the governorship primary.

“The factionalization of PDP, is no more a secret as the two divide now exist as bedfellows residing under the same roof and operating separate pseudo excos within the subratum. As a matter of fact, our beloved party can only be said to be in disarray in in the aftermath of the failed congresses and primary elections.”