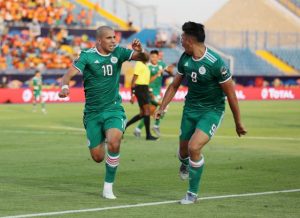 Ivory Coast and Algeria clashed in the quarter-final at the Africa Cup of Nations (Afcon) on Thursday evening in Suez. After a 1-1 draw in regulation time as Algeria missed a penalty, the game went into extra-time and was then settled by spot-kicks. The Desert Foxes won 4-3 on penalties and will face Nigeria in the semi-final, as Ivory Coast’s tournament comes to an end.

TEAM NEWS
After being thoroughly outplayed in their Round of 16 win against Mali, Ibrahima Kamara made two changes to his lineup. Max Gradel came in to replace Nicolas Pepe on the right flank after the latter’s underwhelming display in that match, whilst Jean-Philippe Gbamin dropped down to bench as Ibrahim Sangare came in – central midfield had proven a problem area for the Ivorians in the tournament. At right back, captain Serge Aurier remained out injured as Mamadou Bagayoko continued to deputise.

Algeria named an unchanged side from their 3-0 win against Guinea with coach, Djamel Belmadi happy with his side’s performance and physical recovery since that convincing win. Ismael Bennacer was particularly impressive in that match, proving an assist and making seven dribbles. Join top-scorer in the tournament, Adam Ounas was amongst the substitutes, as was Islam Slimani.

FIGHT FOR THE FLANKS
Early on, this game felt like a real match-up all over the pitch as both sides used three man central midfields and lone strikers. The key players for The Elephants were the two wide players, Max Gradel on the left and Wilfried Zaha on the right. They not only had the main responsibility for Ivory Coast’s attacks, but had to find a way to deal with Algeria’s extremely adventurous fullbacks – Youcef Atal and Ramy Bensebaini.

On the other side, The Desert Foxes had two inverted wingers who looked to move inside from their wide positions to free space for the fullbacks to attack. This put a lot of defensive onus on the central midfielders to cover space on counter attacks, particularly on the right after Atal’s forays.

In the opening stages, Ivory Coast continued their trend this tournament of playing very direct. Most of the passes from deep areas were aimed long in the direction of Jonathan Kodjia. Their start was impressive though considering they had one less rest day than Algeria and had struggled in all facets in most of their games in the Afcon.

Gradel and Zaha were both proving major weapons. The former cut inside to strike the post after a fine Rais M’bolhi fingertip save, then Zaha beat Bensebaini with a dribble but Kodjia couldn’t finish in a crowded box. The attack had come on the break with Atal stranded high up the pitch, Guedioura covering on the right, and Kodjia able to receive in a vacant midfield zone and send Zaha away.

Despite a large number of fouls, it was a very open start to the game with Gradel hitting another start on target and being chopped down after beating Atal. The latter was an undoubted weapon going forward, having scored six times for OGC Nice last season, including a hattrick when playing as a winger. However, his defensive positioning was a real concern. On the opposite side, Zaha was being asked to tuck into narrow positions onto the far ball-side central midfielder, Bennacer when Algeria attacked on the opposite flank. This made the Ivorians susceptible to quick switches of play to Youcef Belaili on Algeria’s left.

BOUNEDJAH
Cote d’Ivoire had played several hopeful longer passes in the direction of Kodjia, usually static and fighting in the air to create second balls for teammates. Algeria, on the other hand, were playing constant longer passes into space towards their focal point, Baghdad Bounedjah. The forward was the most consistently dangerous player on the pitch. Wherever a teammate was facing forward with the ball, the striker saw it as a trigger to make a run into depth.

Whereas Kodjia was doing a good job for his side, Bounedjah was a downright nightmare for Wilfried Kanon and Ismael Traore to deal with. His movement into the channels, chasing lost causes and running in-behind pushed The Elephants deeper, creating big spaces in front of their back four for Belaili and Riyad Mahrez to exploit. One excellent run by the latter saw him spin off the back of Sangare, play a one-two with Belaili and fire a shot narrowly wide.

When the goal came for Belmadi’s men, it combined all the elements of their play: a cross-field switch, Bounedjah winning the ball off a defender, and fullback Bensebaini pulling the ball back for Sofiane Feghouli to finish superbly. Serey Die had been drawn out of his zone to close down and the finish came from that exact area.

ATAL OFF, BOTH SIDES CLOSE
After half an hour, Atal’s game was over after a bad landing on his arm when bombing forward. Mehdi Zeffane came on in his place, a far more conservative fullback. Both sides came close to scoring before the half-time whistle as Gradel received in the box after a diagonal run but was thwarted by the excellent Djamel Benlamri.

Mahrez was then presented with a chance after a quick freekick by Konan was given straight to the winger, but despite beating two men with his trademark feints, the Manchester City man’s shot was blocked. There was still time for another Gradel shot after Zaha swapped wings and picked him out.

The first half had been a very entertaining affair and probably one of Ivory Coast’s better performances in the tournament, particularly the energy in their play considering their Round of 16 match had been on Monday. By the final minute of the first period, Algeria had nine outfield players back inside the final 25 yards of the pitch as they defended aggressively in numbers to see out the half with a lead.

MISSED PENALTY
It took just 21 seconds of the second half for Bounedjah to win a penalty. He forced Konan into an error and then was taken down by goalkeeper, Sylvain Gbohouo. The contact was minimal at best, but summed up the unrelenting test of facing the Qatar-based striker. He stepped up himself, but could only strike the bar.

After that, Algeria showed all their famed game management and gamesmanship abilities, slowing down proceedings and committing a succession of momentum-killing fouls, as they had done in the first half too.

When they conceded 62 minutes in – their first goal let all tournament – it came from an error. Mahrez gave the ball away in midfield, Zaha led a counter, and Kodjia chopped inside Benlamri to curl a shot into the far corner.

The Desert Foxes’ reaction was excellent. They immediately increased the intensity of the match, winning several set plays and going close from some superb Belaili deliveries. The right-footed left winger had particularly stepped up since the equaliser. He set up Bounedjah for a great chance which Gbohouo saved well, then the striker picked out Mahrez’s run and hit shot was somehow cleared off the line by the recovering Bagayoko.

The final contribution from Algeria’s emotional, outstanding striker was to set up Belaili to fire a shot narrowly over after strong hold-up play. It was a real surprise to see Islam Slimani take the forward’s place shortly after. Despite the latter’s pedigree and record for his country, it immediately gave Traore and substitute centre back, Cheick Comara, an easier time. There was simply less depth to Algeria’s play and with less channel runs, the central defenders were no longer drawn out of the middle.

The rest of regulation time had few good incidents. With 37 fouls by the 73rd minute and a swath of substitutions as Sangare went off with cramp and Adam Ounas replaced Mahrez for Algeria, there was a constant breaking of momentum.

The clearest route to goal for Kamara’s team was via Gradel’s deliveries from wide. His left-footed cross set up Zaha to volley a good opening high and wide, as Kodjia continued to find joy by dropping deep, away from pressure and turning to play in his wingers. The Aston Villa man also nearly set up Franck Kessie for a chance in the box with a good pass.

EXTRA TIME
As is so often the case, extra time lacked many moments of real excitement. Maxwell Cornet came on and had a good shooting chance from more Gradel service and Comara headed over from the winger’s set-play.

Algeria had threat on the right from Ounas’ direct dribbling but with Slimani waiting in the box, he required service and was not able to create chances for teammates like Bounedjah had done. Wilfried Bony’s introduction for Kodjia also gave Ivory Coast less movement and pace and the substitute had no impact beyond committing several fouls.

There were still two late chances for Algeria as Kessie sold himself, Belaili received free between-the-lines and set up Slimani for a great opening, but Gbohouo saved excellently. Andy Delort came on for the final action to take a freekick which he put narrowly past the post. The game would be settled on penalties, with Algeria taking a 4-3 victory.

SUMMARY
This was a brilliant game of football, but less about tactics and more about the individual talents of the two teams’ wide players and the movement of their starting forwards (and the lack of movement from their replacements). Algeria were the better team, using more interplay and combinations in attack to work chances for their inverted wingers, but the removal of the game’s best player in striker Bounedjah saw their attacking threat diminish.

Ivory Coast had struggled for any sort of cohesive play in the Afcon prior to this game, but looked more impressive in this match as Zaha had his best game of the tournament, setting up four chances, and Gradel was superb on both flanks, first cutting in to shoot from the left, and then delivering excellent crosses when on the right. Like Algeria, the removal of their mobile focal point forward saw a drop in their goal threat.

This game could easily have been several more goals, but Algeria deserved the victory on the balance of chances having missed a penalty, forced several excellent saves, and had a shot cleared off the line. They will face Nigeria in the semi-final on Sunday.