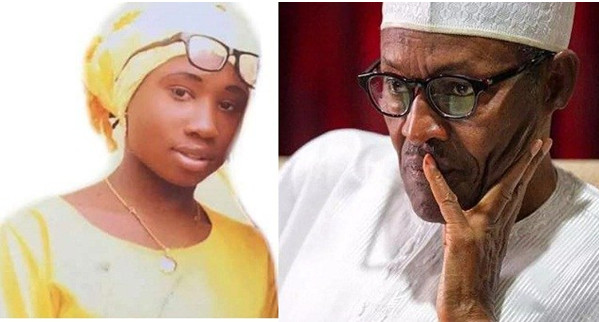 And do not argue with the People of the Scripture except in a way that is best, except for those who commit injustice among them, and say, “We believe in that which has been revealed to us and revealed to you. And our God and your God is one; and we are Muslims [in submission] to Him.” The Quran 29:46

I am constrained to write this for many reasons. But it has become necessary to remind President Buhari that it is time to act. An Igbo adage has it that an old man does not stay at home and watch the goat hang on its titters. And so, there is need to speak up now, and for the President to act before it becomes too late.

It is now part of the dark history of Nigeria that on Monday, 19 February 2018, over 110 girls were abducted from their boarding school in Dapchi by Boko Haram. It was later revealed that the girls were taken to an island in Lake Chad known as a stronghold of fighters loyal to Abu Mus’ab al-Barnawi, a factional leader of Boko Haram. Of the more than 110 girls, about 5 died in captivity. The rest were later released, leaving only one – a Christian who refused to convert to Islam and wear the jihab, a veil worn by some Muslim women in the presence of any male outside of their immediate family, which usually covers the head and chest.

So far, appeals have come from Christian communities world-wide, asking Boko Haram to release Lear Sharibu, like her other mates. The Pope has sent a message to the Nigerian government on Lear. And so have many other governments and well placed dignitaries across the globe. President Muhammadu Buhari vowed on Twitter to do “everything in our power to bring Leah back safely.” But even as we speak, Lear remains in captivity.

Hopes were raised all through Nigeria by Saturday, 24 April, that Boko Haram was contemplating her release, possibly following negotiations with some concerned Islamic clerics. There were clear indications from the authorities after the militants released more than 100 of the girls. Those of her schoolmates who were released confirmed that Leah Sharibu remained in captivity because she refused to convert from Christianity to Islam. There was so much expectation in the town following the news that this last remaining girl would soon be released. On that Saturday the announcement was made, shopkeepers were asked to close work early that afternoon, in anticipation of her arrival. The Inspector General of Police, Ibrahim Idris, told journalists that Saturday in Maiduguri, capital of neighbouring Borno State, that the girl “may be released today”. Idris even said he had to cancel a planned visit to Dapchi to avoid any “security hitch” in the town before Leah’s arrival.

Earlier on that Saturday, soldiers deployed in Dapchi had disappeared from the town’s checkpoints, raising hopes for Leah’s imminent release. It was widely believed that the news of her release must be true because even the body language of the security personnel indicated that the girl was on her way home. The town was in high spirits and full of anticipation. The sudden withdrawal of soldiers from checkpoints was a clear indication that the girl was coming home. But two months later, Lear still remains in captivity. And we make haste to ask: what is actually going on?

Why has Boko Haram insisted on keeping Lear in captivity? We ask because the government of Nigeria needs to know if this faction of Boko Haram has any religious affinity or whether it is one of those rogue formations that fake Islamism in other to steal from the people of the sub-Saharan region. We ask, because we know that at least in Nigeria, Christians and Muslims are brothers and sisters and are expected to live together in harmony. We ask, because we know that Nigeria is a secular country and that citizens are free to practise their faith, whether it is Christianity, Islamism, Baha’i, Judaism, Heathenism or no faith at-all. That is why we are worried.

We are worried because like so many Christians today, some Muslims have the erroneous belief that Muslims and Christians hate each other and that the Christians are regarded as infidels for not believing in Prophet Mohammed. Nothing could be farther from the truth. In actual fact, Christians and Muslims have more in common that brings them together than the things that put them asunder.

First, the Holy Quran mentions the name of Jesus (Isa) 25 times. According to the Sura in 19:20-21, Jesus was born of the Virgin Mary. The Quran explains in 3: 45-47 that Jesus is “highly honoured in this and the next world”. He is called Jesus, son of Mary (Isa Ibn Maryam). He is also defined as Spirit of God (ruh min Allah), the Messiah – blessed of God (Mushia bi ‘l Baraka), the Word of God (Kalimah min Allah) and Prophet Messenger of God (Rasul).

Muslims actually believe that Jesus was a prophet who was given a special message (The Gospel) to convey to all people. This message confirms what was taught in the Torah and it foretold the coming of Prophet Mohammed. So, Jesus always had a vital role to play in the Muslim faith. However, while Muslims accept that Jesus was a teacher, a servant of God and a lover of God’s Word, some of them do not believe that he was the direct son of God.

The point here is that Christians do not believe that Jesus is the son of God in a physical sense. God does not have a wife. So, he would not have had a biological son in that sense. What they do believe is that Jesus is the Son of God in a spiritual sense. For example, Arabs are generally known as “sons of the desert.” This does not mean that the desert gave physical birth to the Arabs. The term “sons of the desert” has to be understood in a spiritual sense. Arabs know the in and out of the desert. They are one with it. That is why they are called “sons of the desert.” Besides having many other titles, such as “Messiah” or “Son of man,” Jesus calls himself “Son of God” because he knows God in a profound way. He is one with Him in essence. In Luke 22:70 the Pharisees wanting evidence on which to incriminate Jesus asked him if he was the son of God, and he replied: “You are right in saying I am.” And in John 3: 16 we are told: “For God so loved the world that he gave his one and only Son, that whoever believes in him shall not perish but have eternal life”

When Surah 22, Hajj, verse 61 says that Allah sees and hears, it does not mean that God has ears and eyes. Rather He is expressing a spiritual truth in such a way that we can understand that He is all-knowing. By the same token, behind the use of “Son of God” to depict Jesus is a spiritual truth expressed in human terms. Because God is so much greater than man, He chooses to express Himself in human terms, as in Jesus, so that we can understand Him better.

The point I want to make however, is that between the Christian and Muslim faiths, there are more grounds for unity, more understanding of brotherhood than misunderstanding of the things that bind us together.

The Quran talks about the miracles Jesus performed, healing the sick and raising the dead, epitomising God’s mercy and love or mankind. It also explains that Jesus was assumed into heaven (3:169) before his actual death. Islamic tradition has it that Jesus was spared death because he was God’s Holy One. And so, Muslims believe that Jesus’ enemies could not triumph over him because he is God’s chosen servant. Both Christians and Muslims believe that Jesus will come again on the Day of Judgement. When he comes, he will destroy the impostors and Anti-Christs (Ad-Dajjal)

Mary is the only woman mentioned by name in the Qur’an, and chapter 19 is named after her. Her father and mother are mentioned as virtuous people. According to the Qur’an, her mother was a constant worshiper and asked God to give her a son so that she could dedicate him to the temple. God accepted her prayer but did not give her what she wanted. Instead, he gave her Mary, who would be the mother of Jesus.

In Islam, the birth of Jesus is considered miraculous and the only such example in human history. Some Qur’anic verses tell us that God revealed his message to Mary but told her that when her people asked her about her baby she would remain silent. Because of this divine revelation, some Muslim theologians consider her a prophet of God. The Prophet of Islam describes her as the highest woman in paradise, literally the master of the women of paradise.

Many Islamic thinkers have continued to regard Jesus as a crucial religious model. A Muslim scholar, Abu Hamid al-Ghazali, encouraged Muslims to pray as Jesus did. Another Muslim philosopher, Ibn ‘Arabi, called Jesus “Seal of the friend of God” (Wilaya) because he possessed the highest knowledge of and intimacy with God. A modern Islamic theologian, Professor Mahmoud Ayoub, has developed an Islamic doctrine that exposes how Jesus exemplified the fulfilment of humanity by being fully illuminated by God’s light (tajalli).

It is true that Islamic teaching about Jesus differs in some ways from Christian teachings. But there is no doubt that both Christians and Muslims share many common beliefs: the virgin birth of Jesus to Mary, profound respect for the mystery of God, love for Jesus, and a willingness to learn from his life as we seek happiness with God. So, why can these truths not be explored to make Nigeria and the world more peaceful and a better and safer place to live in?

Today, wherever there is trouble around the world, people say it is Muslims who are fomenting all the bad blood. But could that be true? Or is the truth more like rogues hiding in the cloak of religion to kill, maim, kidnap or ransom, kill – to create fear among the people – and steal from them? Are these fanatics actually affiliated to any religious bodies? That is what the Nigerian government must find out. There is absolutely no reason for Lear’s continued captivation just because she is a Christian who has refused constitutionally to renounce her faith. The Nigerian government must do something very urgently to secure her immediate release because every eye is on the Buhari administration which many Nigerians look at with suspicion of an Islamic agenda. In the spirit of brotherhood, the government of Nigeria must do something, anything now to free Lear!

Xenophobia: Apartheid by another name!

7 thoughts on “In the spirit of brotherhood: free Lear Sharibu now”