Inec, ‘underage Voters Saga’ And The Burden Of A Clean Register:2019 Issues And Perspectives

Inec, ‘underage Voters Saga’ And The Burden Of A Clean Register:2019 Issues And Perspectives 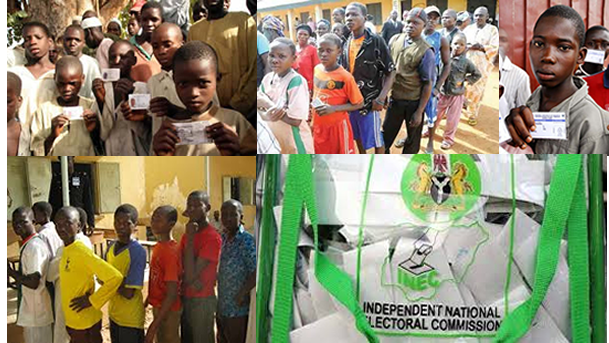 Reports in the media, particularly the social media, showed how several underaged persons participated in the KANSIEC election that was won in a landslide by the state ruling All Progressives Congress (APC).

It has since therefore been difficult for INEC to disassociate itself from the implicit and explicit implications of the outcome of that infamous election in one of Nigeria's most populated states.

In some of the allegations as claimed by the main opposition Peoples Democratic Party (PDP), was the suggestion that since the National Register of Voters compiled by INEC was used in the election, the alleged problem of underaged voting in the Kano Local Government election is linked to a prevalence of underaged registrants in the National Register of Voters as provided by INEC.

Reacting to this scenario, the National Chairman of INEC professor Mahmood claimed that there have not been any formal complaints raised to notify the Commission about this situation. In his words, “I must note that till date, not a single formal complaint on this matter has been received by the Commission, rather some stakeholders including a political party, have taken to the media to criticize INEC and in some cases to impugn the integrity of the National Register of Voters.”

Concerned that some of these claims being made about the Register could create doubts in the minds of citizens about INEC’s preparations for the forthcoming general elections, the Commission on the 21st February 2018 set up an investigative panel into the allegations that underaged persons voted in the Kano State Local Government election, using the Voters Register given to KANSIEC by INEC, as prescribed by law.

Mr. Kola Ologbodiyan the PDP Publicity Secretary speaking to Uchechukwu Ugboaja stated that INEC need not wait until a formal complaint is made to it before the right thing is done. According to him, “If they (INEC) claimed not to have received a formal complaint why did they constitute a committee to go to Kano to investigate the issue, so what we are saying is that INEC as an arbiter cannot continue to pick and choose issues that fall within its purview to deal with as it is obvious that they also need to send a committee to Katsina as well, this situation worries the PDP because INEC continues to act like a parastatal under the Presidency, which is quiet disheartening to Nigerians,” he said.

One of the submission of the committee stated that, “The Register provided by INEC was only sighted in a few polling units, as the register was not used in most of the polling units.” This to a very large extent proves that the use of PVC largely did not take place. With this INEC claims that even though they had provided KANSIEC with the updates voter register, it was clear that the state electoral body only complied partially.

Mr. Kola Ologbodiyan, the PDP spokesperson claimed that INEC cannot rely on the report of an internally set up committee to absolve itself of alleged collusion with the Kano state electoral body to manipulate the outcome of the LG elections as the likelihood of a repetition is imminent in 2019 if it fails to come clean before Nigerians and the entire world on the integrity of the Voter Register.

“The committee set up by INEC is an internal committee of the commission and cannot absolve INEC of allegations that the PDP or Nigerians have made with regards to the the Kano elections.”

He further stated that, the committee didn't address the the major issue which is that INEC had registered under age voters in Kano, either in the past for previous elections or in anticipation for 2019 polls.

“PDP have not claimed that INEC conducted LG elections in Kano, what we are saying is that it is the register that INEC provided for KANSIEC that have been used to conduct the election and that there were underaged voters on that list, but we thank God that we are in the age of communication technology where people were able to capture scenes of minors brandishing PVC's on pictures and videos, because we know that it is only INEC that have the authority to issue PVC's as they are now trying to pass the bulk to KANSIEC.”

“We are however happy that in their statement INEC have promised to go through the register in collaboration with other stakeholders to screen the register with a view to weed out the underage voters in the list, because INEC cannot go into 2019 general elections with this army of underage voters, it will only be a disaster for Nigeria in the end.”

2019 Presidential Poll: Is Atiku's Defeat A Testament That Power Is Transient?

10 thoughts on “Inec, 'underage Voters Saga' And The Burden Of A Clean Register:2019 Issues And Perspectives”