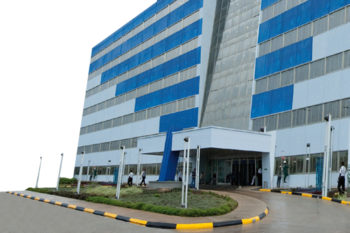 The contract controversy between INTELS Nigeria Limited and the Nigerian Ports Authority (NPA) may have eased off a�Zfollowing the payment of $42.6 million (N13.2 billion) by INTELS into the NPAa��s Treasury Single Account (TSA).

The Managing Director of NPA, Hadiza Bala Usman, stated this while addressing members of the House of Representatives Ad Hoc Committee probing into the matter, saying that the company after receiving termination notice from the Agency, wrote to apologise for not complying with TSA and the new sharing formula.

She said as a result, INTELS has paid the sum $28.1million into the Agencya��s TSA account with a notice of additional $14.5million said to have been paid, but yet to be confirmed by the NPA.

a�?The implementation of TSA by the Federal Government compelled the authority to remit revenue generated directly into government coffers while NPA in turn pays agency fees of 28 percent of whatever was generated to INTELS,a�? she said.

She said according to NPAa��s calculation of $4 million per month as governmenta��s share, based on the previous agreement, what accrued to NPA would be $48 million.

Usman said NPA has two layers of relationship with INTELS namely management agency where it collects revenues on behalf of NPA and keeps 28 percent and port infrastructure development on the basis of which INTELS constructed and manages the Onne Port in Rivers State.

She explained that the initial agreement gave INTEL the powers to generate and keep 28 percent of revenue collected on behalf of NPA.

a�?The NPA under the new management had to come up with a new draft that incorporated a sharing formula in a model that complies with the TSA, which was why we said they should start remitting directly to the TSA while the NPA pays its 28 percent agency fees,a�? she added.

The agreement, according to her, expires in 2020, which makes it 10 years.

Fayemi In Cote D'voire For Talks With Afdb