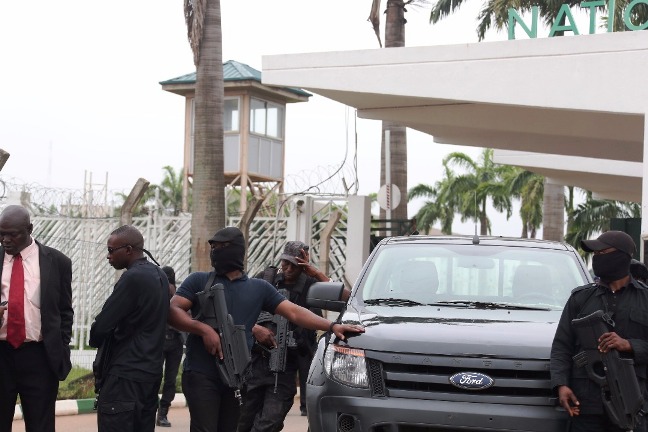 Dear Nigerians, do we really understand the implications of the invasion of the National Assembly by the DSS? Can we reflect and understand that the soul of Nigeria is at stake?

To those politicos misusing our security agencies, please do not forget that the sword you wield to cut off your enemy's head can slice off yours easily. A little history may help. Back in the 1960s, the almighty ruling Northern People's Congress turned the army into its personal weapon of terror. It unleashed the army on political opponents. Unfortunately, among the commanders of operations to crack down on the Tiv were officers who got pissed off by the whole thing and turned their guns on the government on January 15 1966, namely Majors Adewale Ademoyega, Christian Anuforo and Timothy Onwuatuegwu. You think all those masked operatives are conscienceless robots?

Then for the security chiefs who are not ready to go by the book, please look at the fact that these 'masters' of yours are as unreliable as the wind. You are the professional, not them. You know the implications of your actions for everyone, far more than these fellows who think they are the lords of the manor because they have access to the treasury. When the tide changes, you are expendable. Ask Daura Lawal. Ask the CIA chiefs who carried out the Iran-Contra weapons scam for late US President Ronald Reagan in 1986.

My greatest pity is for the operatives who carry out these illegal orders. When the tide changes and their cover is gone, only God knows the number of enemies who are out there waiting for revenge. Do you think being masked hides their identity? Crap; it is very easy to get the ID of every agent who carried out that siege.

Finally, let us never forget that it is not about Buhari, Saraki, PDP and APC; it is about Nigeria. Shall we remain a country without viable institutions? Do we really want a democracy, a real democracy? I appeal to all of us not to be mesmerised by the power plays going on in this country. Daura Lawal did not act solo. High as he is in the intelligence/security hierarchy, he was cleared by someone even if he acted on his initiative. Who is it? I stand to be corrected but the DSS, which is responsible for the domestic component of national security and protection of our leaders, is under the watch of the presidency. So who gave the orders? It is easy to say President BUHARI OR SOMEONE ACTING IN HIS NAME BUT this is a country where the loyalty of officials in sensitive positions are in the wrong place. Can professionals, if need be from M16, FBI or CIA, be called in to interrogate Daura Lawal, in fact, handle the investigation of this affair?

2019 will come and go, but will Nigeria be? Let the actors remember the declaration of ex-President Jonathan: 'My ambition is not worth a drop of blood of any Nigerian.'

Henry C. Onyema is a Lagos- based writer and historian. Email: [email protected]

Nigeria after the Oil Age

7 thoughts on “Invasion Of The National Assembly And Its Implications”