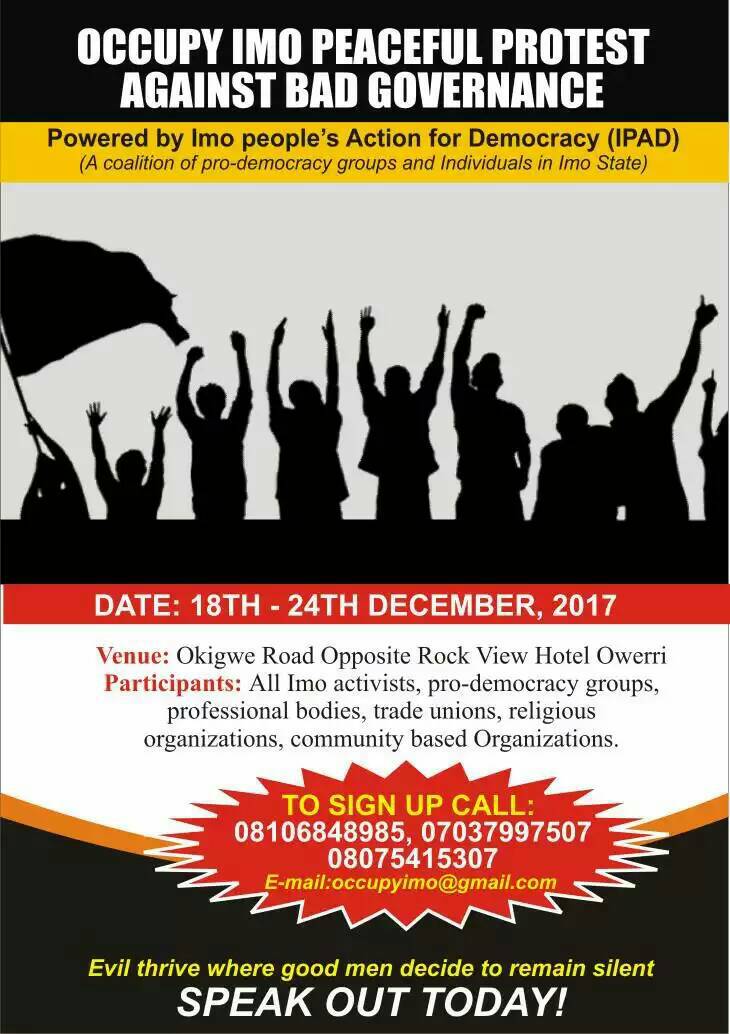 A coalition of pro-democracy groups in Imo state operating under the name of Imo Peoples Action for Democracy (IPAD) has formally notified the Police and the Department of State Services on their planned December 18th to 24th peaceful protest rally. In a notification letter shown to journalists in Owerri on Tuesday, the coordinator of the group Activist Aku Obidinma (Abdul) said the officially notified the security agencies and demanded for security protection during the rally to ensure its not hijacked by paid hoodlums

. Asked if he is sure the security agencies will permit the rally, the die hard activists stated that they never applied for permission as the supreme court has made it clear that the Police nor any other security outfit has powers to grant permission for such since section of the 1999 constitution guarantee the right to peaceful protest. He rather said he is looking up to them to provide security protection for the protesters.

In response to the plans of the government to sponsor a counter protest on same time to commend the governor, he dismissed it and described it as the government’s usual ploy of intimidating people. He promised that the rally will hold as planned and called on Imo people to massively come out on that day. IPAD is organising a one week peaceful protest rally from 18th to 24th December to protest what she termed bad governance in Imo state. Governor Rochas Okorocha of Imo state has been engulfed in many leadership controversies with his latest appointment of his sister as commissioner for happiness and couple fulfilment coming under heavy criticisms.

How I Will Tackle Problems Of Insecurity, Power If Elected President – Sowore