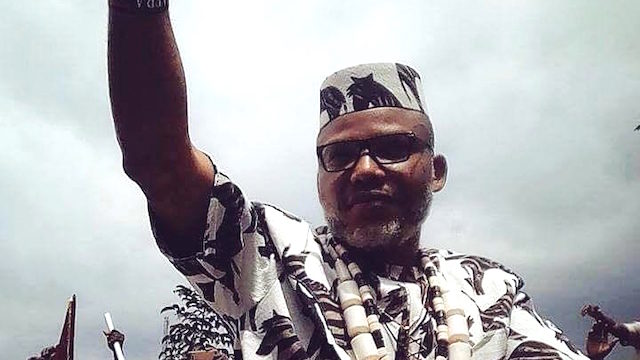 The leader of the Indigenous People of Biafra, IPOB, Nnamdi Kanu, on Tuesday, reacted to claims of Fulani vigilante mounting roadblocks in the South-West.

Similarly, former Aviation Minister, Femi Fani-Kayode alleged that some members of the Miyetti Allah Cattle Breeders Association, MACBAN, under the guise of vigilante, were mounting roadblocks and harassing people of the region.

Reacting, Kanu faulted the Yoruba race for allowing a Fulani vigilante in the South-West.

The separatist, in a statement by the spokesperson of IPOB, Emma Powerful, said: “They come like Thieves in the Night!!! By Dawn they are everywhere. They slaughter your sons, rape your Wives, defile your mothers and take your daughters as sex slaves.

“They kidnap your culture custodians and desecrate your traditions. They have infested your forests and sacred groves. They have become audacious on your own soil and search and interrogate your farmers and hunters as they peacefully pursue their rural livelihoods. They wreak havoc, ransack and loot. That which you hold dear mean less than cows.

“The social media buzz arising from pictures of Fulani Vigilante (all with their ID cards) in Yoruba land accosting prominent Lawyer, Kayode Ajulo In Akure on July 22, has left many questions than the thousands of mixed comments across the social media spectrum.

“Yet, some pertinent questions that stick out are these: When did this Fulani herdsmen vigilante get formed in Yoruba land? Is it ever possible that the entire Yoruba race was collectively unaware of this well-armed Fulani group until just yesterday when – by providence or happenstance – they revealed themselves to the public? Is this not the sort of vigilante that IPOB had completely rejected in Biafraland? Why did the Yoruba cave in?

“While we ponder these questions, plus the many unasked ones, let us not lose sight of the hurried visits to the Presidency in the past few days by two of the preeminent Yoruba traditional leadership in Nigeria – the Oni of Ife and Alafin of Oyo. These visits raised some red flags, especially coming on the heels of the murder of Pa Fasoranti’s daughter and the quantum evidence of significant hostile Fulani herdsmen penetration of Yoruba land.

“It’s more worrisome that, instead of standing up to the bullies and the cabal at Aso Rock, these highly respected leaders were content to banter and engage in the general platitudes of lamely complaining about “insecurity in the land”. They seemed to forget that the ‘thing’ at Aso Rock that they call Buhari, together with the Cabal, is the epicenter of the insecurity and other horrible machinations in the land. Without the Abba Kyari led cabal in Aso Rock, there won’t be anything like Fulani herdsmen, not to talk of their unbridled terror. Even Boko Haram would’ve been history from what was left of them by the sheer grits and gallantry of General Azubuike Ihejirika.

“A few days ago, a prominent Yoruba analyst, Prof Toba Alabi, writing under the caption “The Yoruba Nation And The Dilemma Of Bola Tinubu And Yemi Osinanjo …”, had this to say, and I shall paraphrase: ‘Yoruba has a history of humiliation in Nigeria and this must be addressed. Awolowo was jailed and an army of occupation infiltrated the Southwest. In 1966, Col. Fajuyi was killed. Abiola won an election but died in detention. Abacha jailed Obasanjo, killed Kudirat Abiola, Suliat Adedeji and tried to kill Generals Diya, Olanrewaju and Adisa. What did the Yoruba nation not suffer under Sani Abacha? Every imaginable form of indignity was meted out on them’.

“Now, I ask: Is the Yoruba not being humiliated even more now than before? Have we not seen sufficient signs (and wonders, if you will) to act decisively? Anyways, Prof Alabi was not done yet, as he seemingly pointed the Yoruba to what everybody already knows.

“He said, and I quote: “Olusegun Obasanjo has now realized rather too late that his patriotic zeal for one Nigeria has been largely misplaced. About three years ago when he started observing the contradictions in the Buhari government, so many Yoruba including Tinubu called him names. But today the falcon is coming home to roost. With the clannishness in key appointments, the killer herdsmen and the Ruga Settlement Policy, the emerging supremacy of one ethnic group over others becoming manifest …”.

“In the midst of this seeming complacency of such a great race, one wonders what happened to the indomitable Yoruba civic revolutionary zeal that, in times past, led to cataclysmic changes in Nigeria. Where’s the famed Yoruba media and political activists who fought back with Operation Wetie in 1964, who virtually instigated the first coup in 1966, then forced Babangida to step aside, marooned Abacha into pariah status and early death, and even helped to force Jonathan out of power? Why are they silent while Nigeria, including Yoruba land, is being steadily converted to a neo-Fulani empire on a daily basis?

“It’s not enough that there are some Yorubas of note who have been consistent in pushing back; who have been standing tall and proud; and who have formed the little bulwark that can be said to be the only thing currently standing in some symbolic defense of the Yoruba race. Still, while it’s getting worrisome that vast majorities of Yorubas may already be feeling helpless and conquered, there’s some fleeting comfort in the assumption that the Yoruba might as well be merely bidding their time to calculate and come forth with potent and final solutions.

“Be that as it may, and in the final reckoning of things, ALL oppressed Nigerians can count on the IPOB never to back down, never. Freedom flows through the veins of every Biafran from historical times to present times! That is one covenant that we have with the Almighty Chukwu Okike Abiama!

“That is why it was Biafrans who took it upon themselves to liberate enslaved Africans during the era of slavery in the Americas.

“That is why you cannot discuss any topic of liberations and attempted liberations during the enslavement of Africans in the Americas without talking about the Biafrans who led these liberation efforts.

“That is why Haiti could not be free until a Biafran, Dutty Boukman (an Igbo Dibia), led the Haitian Revolution – a revolution that engendered the second independent country in the Western Hemisphere (second only to the United States) in 1804, leading to the eventual independence of the whole Latin America (with Biafran Haitians fighting in all those wars). That Biafrans liberated Haitians and other South Americans was why Haiti recognised Biafra back in 1967. IPOB is ready. Join us.”

Buhari, APC Keep Mum As 'Anointed' Gbajabiamila Is Enmeshed In US Fraud Scam