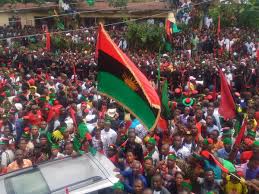 Nnamdi Kanu, leader of the Indigenous People of Biafra, IPOB, has threatened the Abia State Commissioner of Police, Ene Okon, ahead of his parents’ burial.

Kanu vowed to hunt down the Police Commissioner’s children if anybody is killed during the burial.

Parents of the IPOB leader would be laid to rest on Friday in Afaraukwu, Abia State.

The Police Commissioner had earlier warned members of IPOB to steer clear of the burial on February 14.

Okon had said: “Do you think we will sit down here and allow IPOB to participate in the burial? Whoever thinks along that line is fooling himself. IPOB will dance during the burial and the police elephants will dance too.

“I have already reached out to the traditional prime minister of Afaraukwu (Nnamdi Kanu’s community) and told him that if they want the burial to go smoothly and for police to give them security, they should tell IPOB not to near the area not to talk of participating in the burial. If they fail to adhere to what we’ve told them, that means they do not want the burial to go on smoothly because we are going to scatter the place.”

However, Kanu while sharing a photograph of Okon on his Facebook page yesterday, described the Police Commissioner as ‘Inspector”.

Kanu, whose Facebook was blocked but later restored wrote: “If Inspector Okon and his commanders come to my father’s house to kill anyone on 14th February 2020 at my parents’ burial, we will hunt down their children.”

5 thoughts on “IPOB To Abia State Commissioner of Police: "‘we’ll hunt your children"”