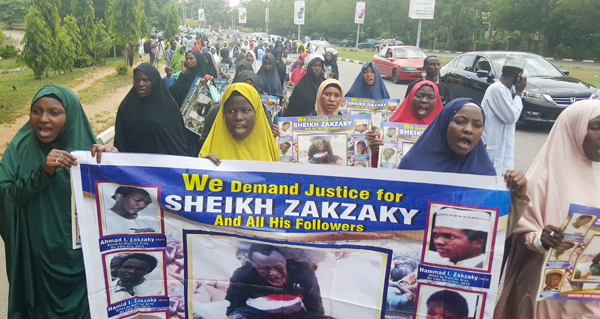 The protesters who stormed the gate of the complex on Wednesday to intensify call for the release of their spiritual leader, Sheik Ibraheem El-Zakyzaky .

The movement embarked on a mass protest on Tuesday to mark his 68th birthday anniversary when the movement warmed Nigerian government not to push the wall.

The group had threatened to force the gate open if the National Assembly leadership fail to attend them.

The protest which has been peaceful turned violent when some protesters suddenly descended on the gate shaking it and later forced it opened causing near stampede because of the large crowd.

Upon gaining entry into the complex the angry protesters started a�?Alahu Akbara�� a�?Alahu Akbar while the policemen attached to the gate tactically took to their heels .

When the mob was advancing toward the second gate which lead to the chambers the leaders quickly appealed to them not to proceed further. At this point the policemen who have fled also joined to make entreaties to calm the fray nerves of the mob.

As at time of this report normalcy has returned and the protesters have moved out and continued with their protest outside the gate .

Sylva: Love And Sacrifice Can Build A More United Nigerian

2019: APC Governors Say Buhari Deserves Another Term With His Achievements