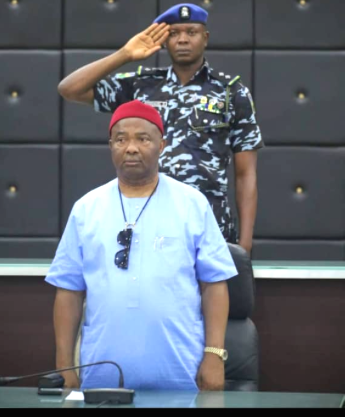 Stakeholders of Ohaji/Egbema and Oguta LGAs of Imo State led by their apex leaders Rt. Hon. Goodluck Nanah Opiah and Chief Gideon Nweze, yesterday, Wednesday 5th February 2020, paid a courtesy visit to the Executive Governor of Imo State, Senator Hope Uzodinma. The Governor told the leaders of the oil producing area that it is only when they realize that the interest of all is more important than personal interest, a lasting solution for the problems in Ohaji /Egbema and Oguta LGAs will be achieved.

He made it known that the Imo State Oil Producing Areas Development Commission, ISOPADEC, an interventionist agency established for the development of the oil producing communities will henceforth commence to publish their financial report on a monthly basis in order to checkmate the income and expenditures as well as ensuring accountability & transparency in the commission.

The leaders who first & foremost congratulated His Excellency for his victory at the supreme court, utilized the opportunity to table some of the pressing issues of the oil producing areas as it concerns lack of basic amenities.

In the address of the Governor, he pledged not to allow misappropriation of allocation/funds meant for the oil producing areas and also to setup a recovery committee to recover the stolen Adapalm land.

Gov. Uzodinma further stated that; it would be in best interest of our the people that selling adapalm palm fruits be stopped but rather palm oil processing plants be set up in various locations to process and produce palm oil which in turn create employments for youths of the area and the entire state at large.

He however, promised to bring in creative thinkers to man & manage ISOPADEC and also monitor compliance scheme to ensure completion of the projects by the contractors in ISOPADEC.

Lastly, he urged them to abide in the spirit of sportsmanship and avoid making enemies because of political party difference.

Some other leaders sighted in the meeting were, Hon. Eugene Dibiagwu, Hon. Emma Orie & a host of other political & traditional leaders.