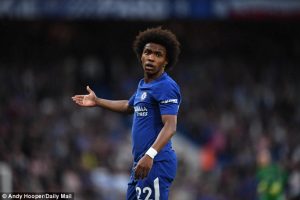 Twice Chelsea midfielder Willian has been close to moving to La Liga and twice the deal has fallen through. If he ends up at  Real Madrid  this summer it would be third time lucky for one of  Brazil ‘s outstanding performers at the  Russia  World Cup.

He was impressing at Shakhtar Donetsk back in 2013 when Barcelona first considered him. Fresh from signing from Corinthians he hit the ground running in  Ukraine  and with Dani Alves coming towards the end of his career, Barca considered replacing one Brazilan flier with another.

Willian was already established as a winger but they saw enough capacity for tracking back, defending, and building the play from deep to convince them that he could work for them in the No 2 position.

Willian ended up moving to Anzhi Makhachkala before going to Chelsea in 2015.

He still possesses the energy and commitment to get up and down the pitch and that made him Barca coach’s Ernesto Valverde’s pick to come in to Barcelona this summer and make up for the club missing out on Antoine Griezmann.

Valverde was left disappointed last week when they signed 21-year-old Malcom instead for half of Chelsea’s £70million asking price for Willian.

The Barca coach said, somewhat coldly, at the weekend: ‘He is a young player with potential that the club has been tracking for a long time and they have decided to sign him.’

No one expected him to distance himself quite so markedly from Malcom but his response was a measure of how much he wanted Willian – a player who fits with far greater ease into the right-midfielder berth in the coach’s preferred 4-4-2.

Sportsmail  understands Barcelona’s move for Malcom was at first designed to bring the price of Willian down but things moved quickly between Bordeaux and the Catalan club’s French Sporting Director Eric Abidal that Malcom was a done deal almost before Chelsea could respond.

Chelsea would accept £65m for their Brazilian international and Real Madrid – who want Belgium keeper Thibaut Courtois – are interested in a player who could line up for the team on the right of a midfield four but could even play in a midfield three.

Real Madrid used Argentine winger Angel Di Maria in a midfield trio when they won the Champions League in 2014 and Madrid are on the lookout for midfield solutions because Croatia midfielder Mateo Kovacic wants to leave the club.

Madrid have shied away from making a huge splash in the market this summer because they remain set on signing Neymar next year when they believe he will have a clause in his contract.

They are happy to use the €100m earned from the sale of Ronaldo however and if the versatile Willian helps release Courtois who they want as the long term replacement for Keylor Navas then the Brazlian could finally get his La Liga move.

Upset Aloisi explains why Roar had no Broich choice