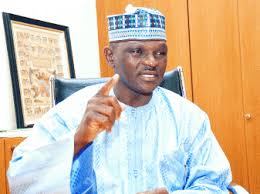 The Founder of Green Party of Nigeria, GPN, one of the newly registered political parties by INEC, Major Hamza Al Mustapha (retired) said it was too early for him to disclose his political ambition whether to contest presidential election in 2019 or not as the national leader and founder of the GPN.

He also said that as an ex military officer, he decided to join politics to form a political party that is credible and solid to cater for the welfare and well beung of Nigerians, esoecially the poor masses and vulnerable in the country to give hope to the people of Nigeria.

Al Mustapha who stated this Friday in Maiduguri on his arrival at the Maiduguri international airport while speaking to newsmen added that the aim of his concealing and creating the Green Party of Nigeria, GPN after studying the political situation of the country was also to support the political sector of the country with a political party that he concealed and created for the poor, youths, helpless, people with disabilities, men and women, peasants and heroes both living and death.

“I am here first to attend the wedding of my daughter. The daughter of late Alhaji Mai Deribe and secondly, I am also here to show support to the political party I have concealed and created for the poor, the youths, the women, people with disabilities, men and women, peasants and heroes living abd death,” Al Mustapha said.

He also said that the vision of his party will impact on Nigerians greatly and impressively as the political party is scientific abd original with an Institute called Green Institute to back up the party for its role in Nigeria and at the international scene.

“The vision and impact of the party is that we are very scientific and very original. We have come up with an institute. That is, Green Institute to back up the party for its role here and then in the international scene.”

“We are concern with the welfare and well being of Nigerians today and tomorrow. We did bit come to just create political party for creating sake. We are looking at the future of this country and we deeply have studied the journey so far since 1957 to date. It is brilliant. I can not give the assessment in a second even I am a spirit”, Hamza said.

Commissioning the party office, Al Mustapha pledged to support and carry them along as well improve their living condition as the party has lined up significant programmes for the supporters and members of the party at all levels.

He also commended the efforts and sacrifice’s of the State Coordinator of the party, Alhaji Jibrin Mustapha Tatai who personally donated a bus for the party, 4 keke NAPEP and rented an office for the party state Secretariat as well as furnished the party office.

Al Mustapha also appreciated the rosy welcome and support accorded him and his team by the teeming supporters abd members of the party while assuring them that very soon the party will commence registration of members with a view to hold its party primaries and Congresses at all levels from ward to the national Congress.

Anambra 2017: Time To Move From Voodooist Utterances To Issue And Governance Based Campaigns

8 thoughts on “It is too early for me to declare my political ambition now… AlMustapha …. I Created Party for Welfare and Well Being of Nigerians”