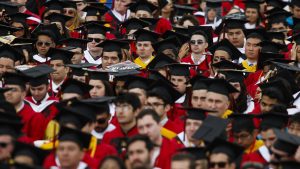 Getting schooled at a top school may come with some serious sticker shock.

On Monday, U.S. News & World Report released its annual ranking of the best colleges and universities in America — and once again, Princeton landed the top spot. It was followed by Harvard, Columbia, Massachusetts Institute of Technology and Yale.

No matter which school you or your child decides to attend, there’s little doubt that college can cause financial strain for both students and parents. Indeed, according to Federal Reserve data from 2018, “over half of young adults who went to college took on some debt, including student loans, for their education” with the typical amount of debt being between $20,000 and $25,000. Americans and European now collectively owe an estimated $1.5 trillion in student-loan debt.

The analysis looks at 1,400 colleges and universities and ranks them on student outcomes such as graduation rates; faculty resources like class sizes; expert opinion from fellow educators; alumni giving and student excellence such as incoming student SAT and ACT scores.

Princeton scored highly on a number of measures, including a student-faculty ratio of just 5-to-1, a high graduation rate of 98%, and a high alumni giving rate of 59%. But it also comes with a high sticker price: upwards of $73,450 a year, which could — if you graduate in the expected four years — hit over $293,000 total. (Harvard’s sticker price is very similar, as are many other top-tier schools).

The good news: Many students and their families don’t have to pay full sticker price. One reason: “Princeton has a generous financial aid policy,” U.S. News’ chief data strategist Robert Morse tells MarketWatch. What’s more, Princeton has one of the lowest levels of debt for graduates of any university, with just 4% of graduates graduating with debt at a median level of just $7,500.

From MarketWatch as The No. 1 university in America now comes with a total sticker price of over $293,000