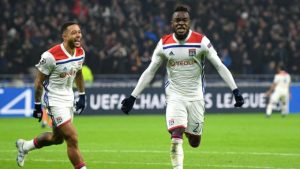 Maxwel Cornet has rued Lyon’s missed chances in their 2-2 draw with Manchester City in their penultimate Uefa Champions League fixture.

The Ivorian star put Bruno Genesio’s side ahead twice at the Groupama Stadium but they were pegged back by Aymeric Laporte and Sergio Aguero’s headers at different occasions before the end of regular time.

The Kids had squandered several opportunities to open the scoring in the first half before their second-half breakthrough.

And Cornet who was awarded the Man of the Match of the encounter has described the result as ‘a shame’ after failing to grab maximum points that could have confirmed their qualification to the Champions League knockout round in front of home fans.

“We had a very good game tonight, collectively speaking. We showed a beautiful side of ourselves. We were solid defensively and creating plenty of chances,” Cornet told  club website .

“It’s a shame we couldn’t win. We could have opened the score in the first half. We know that at this level you aren’t forgiven for small mistakes. City are a very big team. We also showed our weapons. We will now go for the qualification in Ukraine.”

After his first goal against the Citizens at the Etihad in September ,  Cornet’s brace in Tuesday’s reverse fixture  makes him the first player to score three goals against Manchester City in the Uefa Champions League since Lionel Messi in the 2016-17 season.

“For a striker, it’s good to get as many chances in a match as I got tonight. It was important to stay in the game after missing my first chances,” the former Metz player said.

“I stayed focused and was successful after that. The first goal? I saw the keeper off his line. I took my chance and it paid off. I’m happy with this goal. The second one? I tried to shoot between the keeper’s legs.”

The 22-year-old has proved himself in the two matches he has started this season [vs. Man City] with three goals despite playing eight games in the French top-flight as a substitute this season.

“When the coach calls on me, I try to answer without any qualms,” he added.

“The only thing that counts for me is the pleasure of being on the pitch. I’m happy with the brace, but I would have preferred to have qualified.”

Manchester City have qualified to the Champions League knockout while Lyon will have to get a win or a draw against Shakhtar Donetsk in their final Group F game to confirm their progress.