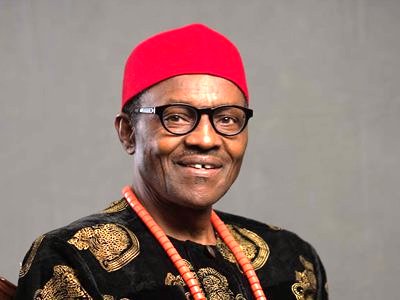 A pro-democracy and non-governmental organization – HUMAN RIGHTS WRITERS ASSOCIATION OF NIGERIA (HURIWA) has described as laughable, pedestrian and disgraceful, the seeming joy and apparent celebrations by some supporters of President Muhammadu Buhari over his proposed visit to the South East of Nigeria.

The Rights group has also challenged President Buhari to display presidential statesmanship by discontinuing the implementation of policies and programmes that graphically presents him as being rabidly pro-North and pro-Islam.

HURIWA is of the considered opinion that the disproportionate concentration of all or most of the strategic national defence portfolios and internal security command positions in the North and by Moslems under the current dispensation remains a big dent in any claim by President Buhari of being a nationalist and a statesman.

The Rights group said the President must use the opportunity of this state visit to the South East to end the perennial alienation and lopsided appointments that relegated the South East of Nigeria to the background in the scheme of things especially on issues of National Defence and security architecture.

HURIWA carpeted the loyalists of the APC –led federal government for erecting a mountain out of a Mole hill by celebrating the proposed visit of President Buhari as if it amounted to the breaking of a World’s record. The Rights group wondered why some misguided and mischievous politicians holding public offices under the APC-led Federal government are dissipating and frittering public fund to sponsor advertorials to celebrate Buhari’s planned visit to the South East of Nigeria.

HURIWA said the President must play a nationalistic card and also compel his officials in all defence related agencies to stop the nepotistic appointments of Moslem Northerners only.