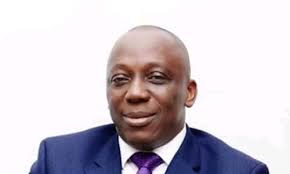 Concerned Itsekiri Coastal Communities of Warri North and Warri South West have cried out to the Delta State Government to prevail on Express Petroleum and Gas Company Limited and its Technical Partner, Conoco Phillip Energy to stop neglecting its corporate social responsibilities to their host communities.

The group in their position paper submitted to the Delta State Attorney-General and Commissioner for Justice, Mr. Peter Mrakpor on recently at Government House Annex, Warri, accused Express Petroleum and Gas Coy and Conoco Philip Energy Nigeria Limited of several infractions including failure to recognize and deal with its host Itsekiri communities.

The communities are demanding that the Delta State Government should prevail on both oil companies to enter into a Global Memoranda of Understanding GMoU that will regulate the relationship between them and the companies.

In order to prove their case, the group tendered several documents from various agencies of Government including a Court judgment where the Oil Company was asked to pay compensation to some leaders of the communities for masterminding their illegal arrest and detention in Kirikiri Prison in 2011 as evidence that the disputed oil field is

located within their domain.
They appealed to the Delta State Government to call on Express Petroleum and Conoco Philips Energy to order, and honour its six points demand which include annual scholarship awards to students of their Delta host communities, community assisted projects, employment slot to all the Itsekiri concerned communities, contracts and monthly

stipends to leaders of the communities. They also demanded for the payment of the balance 50% of the compensation sum awarded by the Court against the company for the illegal arrest of representatives of

the Communities.
The Attorney-General of Delta State, Mr. Peter Mrakpor while addressing the Concerned Itsekiri Orere Coastal Communities delegation, frowned at the non-appearance of the Company’s representatives in the meeting in spite of being invited to attend. The company did not attend the meeting neither was there any correspondence sent to the office of the Delta Attorney-General handling the petition of the aggrieved Itsekiri oil communities to explain the reason for not attending the meeting.

The Delta A-G who was represented at the meeting by the Director, Department of Peoples Rights, Mr. Toris Megbuluba, however thanked the group for demonstrating maturity in their 23 years tussle with the said companies without resorting to violence and assured them that the Delta State Government was on top of the matter as according to him, all the parties will be brought to a round table discussion to resolve the intractable dispute.

This, he said was part of the Delta State Government’s commitment in promoting harmonious relationship and attract investors to the State.

Mrakpor maintained that it was a policy of the Delta State Government that negotiation of all MoUs between oil bearing communities and oil companies operating in their domain was supervised and drafted by the Ministry of Justice, adding that the move was to ensure fairness, equity and justice to all parties.

While saying that Government will continue to provide a conducive environment for investors to operate in the state, he stressed the need for oil companies to respect the yearnings and aspirations of the people by being fully committed to their corporate social responsibilities to their host communities.

RULE OF LAW ALERT — Does Nigeria's Supreme Court Have Original Jurisdiction to Entertain the Case Filed by the Senate Over Onoghen.