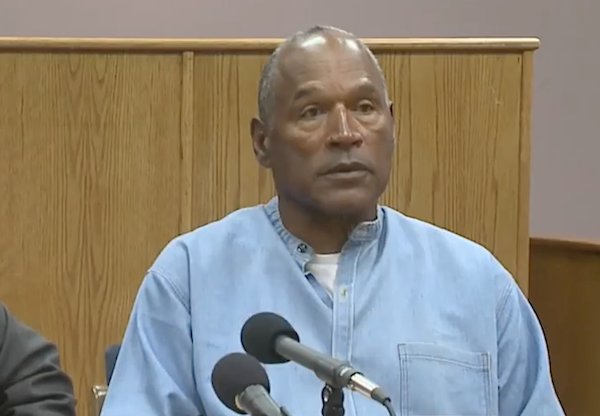 “My commitment to change is to be a better person,” Simpson, 70, told a parole board hearing in the western US state of Nevada, which received blanket coverage on news networks.

“If I would have made a better judgment back then, none of this would have never happened,” Simpson said of the September 2007 robbery of two sports memorabilia dealers that led to his prison sentence.

Simpson was found not guilty in 1995 of the grisly murders of his ex-wife, Nicole Brown Simpson, and a male companion, Ron Goldman, in a racially charged case which became known as the “Trial of the Century.”

But the former National Football League running back and actor was sent to prison in 2008 for his role in the robbery of the memorabilia dealers at a Las Vegas resort.

Simpson appeared before the Nevada parole board by video conference from Lovelock Correctional Center, the medium-security prison where he is serving his sentence.

Seated behind a plain wooden table, he was wearing standard-issue blue jeans, a light blue button-down shirt, a white T-shirt and white sneakers.

“Right now I’m at a point in my life where all I want to do is spend time, as much time as I can, with my children and my friends,” Simpson said.

“I’ve done my time, you know? I’ve done it as well and as respectfully as I think anybody can.”

Also attending the hearing was his eldest daughter Arnelle, attorney Malcolm LaVergne, and Bruce Fromong, one of the victims of the crime.

The other sports memorabilia dealer, Alfred Beardsley, died in November 2015.

Simpson could walk free as early as October 1 if the parole board rules in his favor. Legal observers expect Simpson to be granted parole.

Simpson was convicted in October 2008 of armed robbery, assault, kidnapping and other offenses after he and five associates — two of whom were armed — ambushed the two sports memorabilia dealers in a casino hotel room.

He was sentenced to a minimum of nine years in prison and a maximum of 33 years.

Orenthal James “O.J.” Simpson shot to fame in the 1970s with the NFL’s Buffalo Bills after winning the prestigious Heisman Trophy as a running back at the University of Southern California.

He retired from football in 1979 after setting numerous rushing records and went on to become an advertising pitchman and actor (“The Towering Inferno,” “The Naked Gun”).

In June 1994, Simpson’s 35-year-old ex-wife, Brown Simpson, and Goldman were found stabbed to death outside her Los Angeles home.

Simpson was arrested after a low-speed car chase through Los Angeles that was broadcast live by television stations and watched by millions.

He was acquitted in October 1995 after a nine-month trial, a verdict that was greeted with disbelief by many Americans.

Simpson was subsequently found liable for the deaths in a 1997 civil suit and was ordered to pay damages totalling $33.5 million to the families of the victims.

In the last round of NUC accreditation, Crescent University got 100% –PRO